Did Hedge Funds Drop The Ball On Autoliv Inc. (ALV) ?

There are several ways to beat the market, and investing in small cap stocks has historically been one of them. We like to improve the odds of beating the market further by examining what famous hedge fund operators such as Jeff Ubben, George Soros and Carl Icahn think. Those hedge fund operators make billions of dollars each year by hiring the best and the brightest to do research on stocks, including small cap stocks that big brokerage houses simply don’t cover. Because of Carl Icahn and other elite funds’ exemplary historical records, we pay attention to their small cap picks. In this article, we use hedge fund filing data to analyze Autoliv Inc. (NYSE:ALV).

Autoliv Inc. (NYSE:ALV) shares haven’t seen a lot of action during the second quarter. Overall, hedge fund sentiment was unchanged. The stock was in 13 hedge funds’ portfolios at the end of June. The level and the change in hedge fund popularity aren’t the only variables you need to analyze to decipher hedge funds’ perspectives. A stock may witness a boost in popularity but it may still be less popular than similarly priced stocks. That’s why at the end of this article we will examine companies such as Zynga Inc (NASDAQ:ZNGA), AECOM (NYSE:ACM), and Monolithic Power Systems, Inc. (NASDAQ:MPWR) to gather more data points. Our calculations also showed that ALV isn’t among the 30 most popular stocks among hedge funds (view the video below). 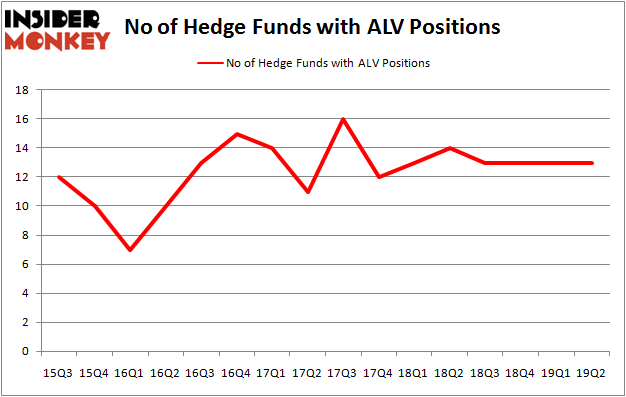 Unlike some fund managers who are betting on Dow reaching 40000 in a year, our long-short investment strategy doesn’t rely on bull markets to deliver double digit returns. We only rely on hedge fund buy/sell signals. We’re going to view the recent hedge fund action encompassing Autoliv Inc. (NYSE:ALV).

What have hedge funds been doing with Autoliv Inc. (NYSE:ALV)? 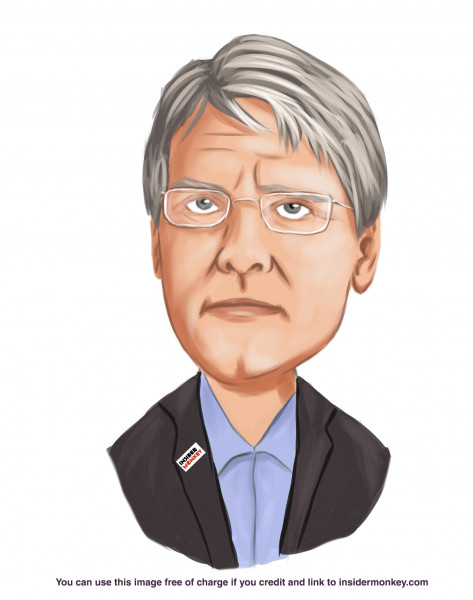 According to publicly available hedge fund and institutional investor holdings data compiled by Insider Monkey, Christer Gardell and Lars Forberg’s Cevian Capital has the biggest position in Autoliv Inc. (NYSE:ALV), worth close to $403.6 million, corresponding to 74.4% of its total 13F portfolio. Sitting at the No. 2 spot is Citadel Investment Group, led by Ken Griffin, holding a $17.8 million position; the fund has less than 0.1%% of its 13F portfolio invested in the stock. Some other peers with similar optimism include Renaissance Technologies, Kenneth Squire’s 13D Management and Ed Beddow and William Tichy’s Beddow Capital Management.

Due to the fact that Autoliv Inc. (NYSE:ALV) has experienced a decline in interest from the entirety of the hedge funds we track, it’s safe to say that there was a specific group of hedgies that slashed their entire stakes in the second quarter. It’s worth mentioning that Brandon Haley’s Holocene Advisors dumped the biggest stake of all the hedgies watched by Insider Monkey, worth close to $1.3 million in stock. Hoon Kim’s fund, Quantinno Capital, also sold off its stock, about $0.3 million worth. These moves are important to note, as aggregate hedge fund interest stayed the same (this is a bearish signal in our experience).

As you can see these stocks had an average of 27 hedge funds with bullish positions and the average amount invested in these stocks was $542 million. That figure was $452 million in ALV’s case. Zynga Inc (NASDAQ:ZNGA) is the most popular stock in this table. On the other hand Antero Midstream Corp (NYSE:AM) is the least popular one with only 15 bullish hedge fund positions. Compared to these stocks Autoliv Inc. (NYSE:ALV) is even less popular than AM. Hedge funds clearly dropped the ball on ALV as the stock delivered strong returns, though hedge funds’ consensus picks still generated respectable returns. Our calculations showed that top 20 most popular stocks among hedge funds returned 24.4% in 2019 through September 30th and outperformed the S&P 500 ETF (SPY) by 4 percentage points. A small number of hedge funds were also right about betting on ALV as the stock returned 12.9% during the third quarter and outperformed the market by an even larger margin.