Did Hedge Funds Drop The Ball On Ambarella Inc (AMBA) ?

We can judge whether Ambarella Inc (NASDAQ:AMBA) is a good investment right now by following the lead of some of the best investors in the world and piggybacking their ideas. There’s no better way to get these firms’ immense resources and analytical capabilities working for us than to follow their lead into their best ideas. While not all of these picks will be winners, our research shows that these picks historically outperformed the market when we factor in known risk factors.

Is Ambarella Inc (NASDAQ:AMBA) a healthy stock for your portfolio? Money managers are turning less bullish. The number of bullish hedge fund bets were cut by 1 in recent months. Our calculations also showed that AMBA isn’t among the 30 most popular stocks among hedge funds.

We’re going to take a peek at the recent hedge fund action regarding Ambarella Inc (NASDAQ:AMBA).

What have hedge funds been doing with Ambarella Inc (NASDAQ:AMBA)?

Heading into the first quarter of 2019, a total of 14 of the hedge funds tracked by Insider Monkey held long positions in this stock, a change of -7% from the previous quarter. The graph below displays the number of hedge funds with bullish position in AMBA over the last 14 quarters. With hedgies’ positions undergoing their usual ebb and flow, there exists a few key hedge fund managers who were adding to their holdings substantially (or already accumulated large positions). 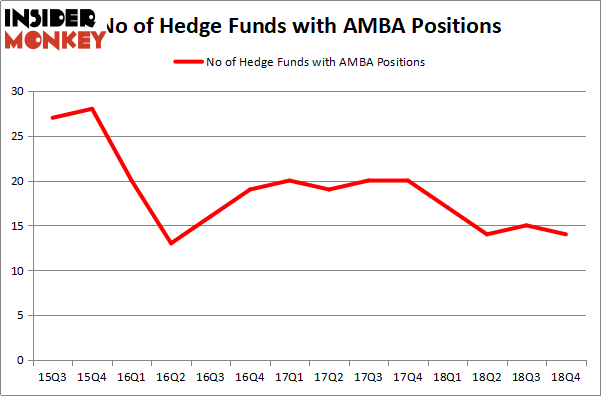 According to publicly available hedge fund and institutional investor holdings data compiled by Insider Monkey, Ken Griffin’s Citadel Investment Group has the biggest position in Ambarella Inc (NASDAQ:AMBA), worth close to $33.1 million, amounting to less than 0.1%% of its total 13F portfolio. On Citadel Investment Group’s heels is Nokota Management, led by Matthew Knauer and Mina Faltas, holding a $21 million call position; 0.7% of its 13F portfolio is allocated to the company. Some other members of the smart money that hold long positions include Jack Ripsteen’s Potrero Capital Research, Phill Gross and Robert Atchinson’s Adage Capital Management and Robert Rodriguez and Steven Romick’s First Pacific Advisors LLC.

Seeing as Ambarella Inc (NASDAQ:AMBA) has faced a decline in interest from the smart money, logic holds that there exists a select few funds who sold off their entire stakes last quarter. Intriguingly, Joe DiMenna’s ZWEIG DIMENNA PARTNERS said goodbye to the biggest investment of all the hedgies followed by Insider Monkey, valued at close to $2 million in call options, and David Alexander Witkin’s Beryl Capital Management was right behind this move, as the fund cut about $1.8 million worth. These transactions are intriguing to say the least, as total hedge fund interest dropped by 1 funds last quarter.

As you can see these stocks had an average of 9 hedge funds with bullish positions and the average amount invested in these stocks was $33 million. That figure was $75 million in AMBA’s case. The Marcus Corporation (NYSE:MCS) is the most popular stock in this table. On the other hand LendingClub Corp (NYSE:LC) is the least popular one with only 7 bullish hedge fund positions. Compared to these stocks Ambarella Inc (NASDAQ:AMBA) is more popular among hedge funds. Our calculations showed that top 15 most popular stocks) among hedge funds returned 24.2% through April 22nd and outperformed the S&P 500 ETF (SPY) by more than 7 percentage points. Hedge funds were also right about betting on AMBA as the stock returned 42.4% and outperformed the market by an even larger margin. Hedge funds were clearly right about piling into this stock relative to other stocks with similar market capitalizations.