We can judge whether Abercrombie & Fitch Co. (NYSE:ANF) is a good investment right now by following the lead of some of the best investors in the world and piggybacking their ideas. There’s no better way to get these firms’ immense resources and analytical capabilities working for us than to follow their lead into their best ideas. While not all of these picks will be winners, our research shows that these picks historically outperformed the market when we factor in known risk factors.

Is Abercrombie & Fitch Co. (NYSE:ANF) worth your attention right now? Hedge funds are taking an optimistic view. The number of long hedge fund bets moved up by 2 recently. Our calculations also showed that ANF isn’t among the 30 most popular stocks among hedge funds. ANF was in 22 hedge funds’ portfolios at the end of December. There were 20 hedge funds in our database with ANF holdings at the end of the previous quarter.

What does the smart money think about Abercrombie & Fitch Co. (NYSE:ANF)? 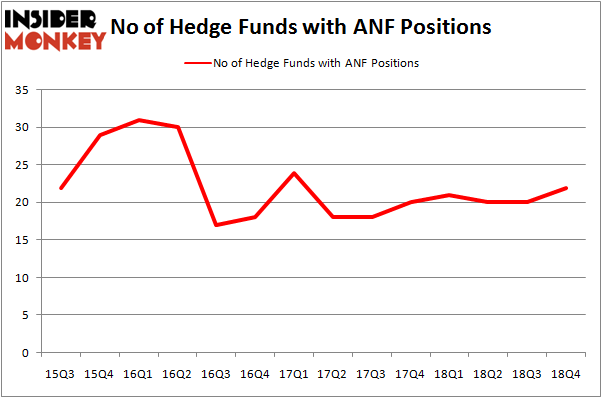 When looking at the institutional investors followed by Insider Monkey, Peter Rathjens, Bruce Clarke and John Campbell’s Arrowstreet Capital has the biggest position in Abercrombie & Fitch Co. (NYSE:ANF), worth close to $32.2 million, accounting for 0.1% of its total 13F portfolio. On Arrowstreet Capital’s heels is Robert Bishop of Impala Asset Management, with a $19.9 million position; the fund has 1.1% of its 13F portfolio invested in the stock. Other professional money managers with similar optimism contain Anand Parekh’s Alyeska Investment Group, Noam Gottesman’s GLG Partners and Ken Griffin’s Citadel Investment Group.

Consequently, key hedge funds were breaking ground themselves. Alyeska Investment Group, managed by Anand Parekh, assembled the most valuable position in Abercrombie & Fitch Co. (NYSE:ANF). Alyeska Investment Group had $17.7 million invested in the company at the end of the quarter. Claes Fornell’s CSat Investment Advisory also initiated a $0.2 million position during the quarter. The only other fund with a brand new ANF position is Ben Levine, Andrew Manuel and Stefan Renold’s LMR Partners.

As you can see these stocks had an average of 11 hedge funds with bullish positions and the average amount invested in these stocks was $130 million. That figure was $128 million in ANF’s case. Plantronics, Inc. (NYSE:PLT) is the most popular stock in this table. On the other hand Autolus Therapeutics plc (NASDAQ:AUTL) is the least popular one with only 6 bullish hedge fund positions. Compared to these stocks Abercrombie & Fitch Co. (NYSE:ANF) is more popular among hedge funds. Our calculations showed that top 15 most popular stocks) among hedge funds returned 24.2% through April 22nd and outperformed the S&P 500 ETF (SPY) by more than 7 percentage points. Hedge funds were also right about betting on ANF as the stock returned 38.1% and outperformed the market by an even larger margin. Hedge funds were clearly right about piling into this stock relative to other stocks with similar market capitalizations.