Unlike some fund managers who are betting on Dow reaching 40000 in a year, our long-short investment strategy doesn’t rely on bull markets to deliver double digit returns. We only rely on hedge fund buy/sell signals. We’re going to take a look at the latest hedge fund action regarding CVS Health Corporation (NYSE:CVS).

How have hedgies been trading CVS Health Corporation (NYSE:CVS)? 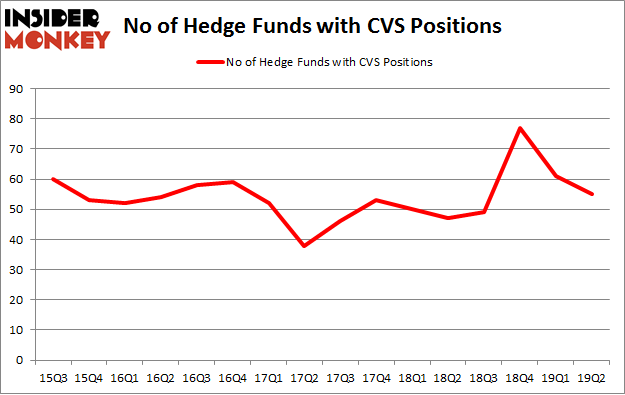 Of the funds tracked by Insider Monkey, David E. Shaw’s D E Shaw has the most valuable position in CVS Health Corporation (NYSE:CVS), worth close to $177.4 million, comprising 0.2% of its total 13F portfolio. The second most bullish fund manager is Ken Griffin of Citadel Investment Group, with a $131.5 million position; 0.1% of its 13F portfolio is allocated to the stock. Remaining hedge funds and institutional investors that are bullish consist of Israel Englander’s Millennium Management, Phill Gross and Robert Atchinson’s Adage Capital Management and Ken Griffin’s Citadel Investment Group.

Judging by the fact that CVS Health Corporation (NYSE:CVS) has witnessed declining sentiment from the smart money, it’s easy to see that there were a few money managers that elected to cut their entire stakes by the end of the second quarter. At the top of the heap, Steven Boyd’s Armistice Capital said goodbye to the largest investment of the 750 funds tracked by Insider Monkey, totaling an estimated $74.9 million in stock. Jeffrey Altman’s fund, Owl Creek Asset Management, also dropped its stock, about $67.8 million worth. These bearish behaviors are important to note, as total hedge fund interest dropped by 6 funds by the end of the second quarter.

As you can see these stocks had an average of 40.75 hedge funds with bullish positions and the average amount invested in these stocks was $1880 million. That figure was $986 million in CVS’s case. Intuit Inc. (NASDAQ:INTU) is the most popular stock in this table. On the other hand VMware, Inc. (NYSE:VMW) is the least popular one with only 34 bullish hedge fund positions. Compared to these stocks CVS Health Corporation (NYSE:CVS) is more popular among hedge funds. Our calculations showed that top 20 most popular stocks among hedge funds returned 24.4% in 2019 through September 30th and outperformed the S&P 500 ETF (SPY) by 4 percentage points. Hedge funds were also right about betting on CVS as the stock returned 16.8% during Q3 and outperformed the market by an even larger margin. Hedge funds were clearly right about piling into this stock relative to other stocks with similar market capitalizations.