Our extensive research has shown that imitating the smart money can generate significant returns for retail investors, which is why we track nearly 750 active prominent money managers and analyze their quarterly 13F filings. The stocks that are heavily bought by hedge funds historically outperformed the market, though there is no shortage of high profile failures like hedge funds’ 2018 losses in Facebook and Apple. Let’s take a closer look at what the funds we track think about CubeSmart (NYSE:CUBE) in this article.

Is CubeSmart (NYSE:CUBE) the right investment to pursue these days? Prominent investors are getting less bullish. The number of bullish hedge fund positions fell by 2 lately. Our calculations also showed that CUBE isn’t among the 30 most popular stocks among hedge funds (see the video below). CUBE was in 18 hedge funds’ portfolios at the end of the second quarter of 2019. There were 20 hedge funds in our database with CUBE holdings at the end of the previous quarter.

To the average investor there are tons of metrics market participants employ to appraise their stock investments. Some of the most underrated metrics are hedge fund and insider trading sentiment. Our researchers have shown that, historically, those who follow the best picks of the top fund managers can outclass the S&P 500 by a significant margin (see the details here).

Unlike former hedge manager, Dr. Steve Sjuggerud, who is convinced Dow will soar past 40000, our long-short investment strategy doesn’t rely on bull markets to deliver double digit returns. We only rely on hedge fund buy/sell signals. Let’s take a look at the new hedge fund action regarding CubeSmart (NYSE:CUBE).

At the end of the second quarter, a total of 18 of the hedge funds tracked by Insider Monkey were bullish on this stock, a change of -10% from the previous quarter. The graph below displays the number of hedge funds with bullish position in CUBE over the last 16 quarters. With the smart money’s capital changing hands, there exists an “upper tier” of noteworthy hedge fund managers who were increasing their holdings meaningfully (or already accumulated large positions). 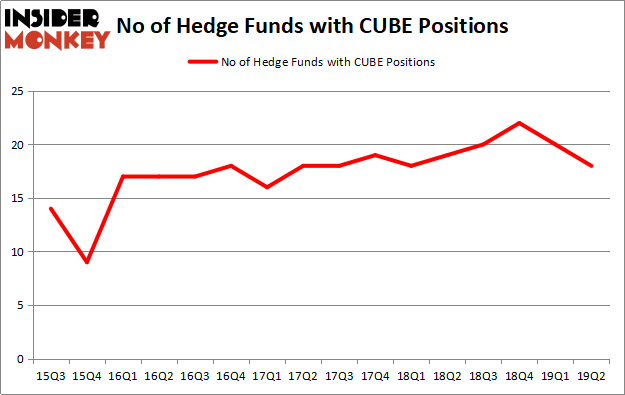 The largest stake in CubeSmart (NYSE:CUBE) was held by Diamond Hill Capital, which reported holding $112 million worth of stock at the end of March. It was followed by AEW Capital Management with a $100.3 million position. Other investors bullish on the company included Millennium Management, Carlson Capital, and Renaissance Technologies.

Due to the fact that CubeSmart (NYSE:CUBE) has faced a decline in interest from the smart money, logic holds that there is a sect of funds that elected to cut their positions entirely in the second quarter. It’s worth mentioning that Peter Rathjens, Bruce Clarke and John Campbell’s Arrowstreet Capital dumped the largest investment of the “upper crust” of funds tracked by Insider Monkey, totaling about $23.5 million in stock, and Dmitry Balyasny’s Balyasny Asset Management was right behind this move, as the fund said goodbye to about $10.4 million worth. These bearish behaviors are intriguing to say the least, as aggregate hedge fund interest dropped by 2 funds in the second quarter.

As you can see these stocks had an average of 17.5 hedge funds with bullish positions and the average amount invested in these stocks was $347 million. That figure was $384 million in CUBE’s case. Exelixis, Inc. (NASDAQ:EXEL) is the most popular stock in this table. On the other hand Starwood Property Trust, Inc. (NYSE:STWD) is the least popular one with only 14 bullish hedge fund positions. CubeSmart (NYSE:CUBE) is not the most popular stock in this group but hedge fund interest is still above average. Our calculations showed that top 20 most popular stocks among hedge funds returned 24.4% in 2019 through September 30th and outperformed the S&P 500 ETF (SPY) by 4 percentage points. Hedge funds were also right about betting on CUBE, though not to the same extent, as the stock returned 5.3% during the third quarter and outperformed the market as well.