Hedge funds are known to underperform the bull markets but that’s not because they are bad at investing. Truth be told, most hedge fund managers and other smaller players within this industry are very smart and skilled investors. Of course, they may also make wrong bets in some instances, but no one knows what the future holds and how market participants will react to the bountiful news that floods in each day. Hedge funds underperform because they are hedged. The Standard and Poor’s 500 Index returned approximately 20% in the first 9 months of this year through September 30th (including dividend payments). Conversely, hedge funds’ top 20 large-cap stock picks generated a return of 24% during the same 9-month period. An average long/short hedge fund returned only a fraction of this due to the hedges they implement and the large fees they charge. Our research covering the last 18 years indicates that investors can outperform the market by imitating hedge funds’ consensus stock picks rather than directly investing in hedge funds. That’s why we believe it isn’t a waste of time to check out hedge fund sentiment before you invest in a stock like Carrols Restaurant Group, Inc. (NASDAQ:TAST).

Is Carrols Restaurant Group, Inc. (NASDAQ:TAST) the right pick for your portfolio? Money managers are getting more optimistic. The number of long hedge fund positions went up by 1 recently. Our calculations also showed that TAST isn’t among the 30 most popular stocks among hedge funds (see the video below). TAST was in 20 hedge funds’ portfolios at the end of June. There were 19 hedge funds in our database with TAST positions at the end of the previous quarter. 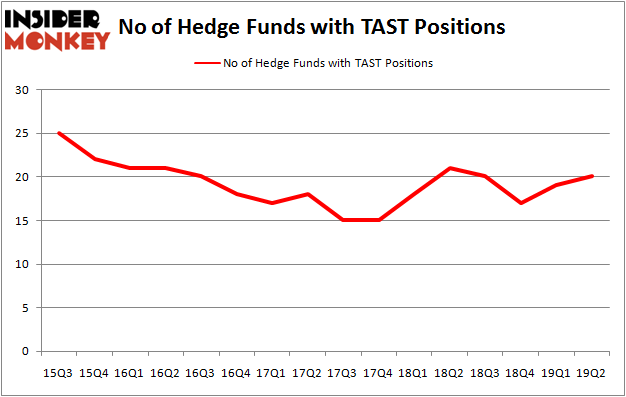 Unlike other investors who track every movement of the 25 largest hedge funds, our long-short investment strategy relies on hedge fund buy/sell signals given by the 100 best performing hedge funds. We’re going to take a gander at the key hedge fund action surrounding Carrols Restaurant Group, Inc. (NASDAQ:TAST).

Heading into the third quarter of 2019, a total of 20 of the hedge funds tracked by Insider Monkey held long positions in this stock, a change of 5% from the previous quarter. The graph below displays the number of hedge funds with bullish position in TAST over the last 16 quarters. With hedge funds’ capital changing hands, there exists a few notable hedge fund managers who were increasing their stakes considerably (or already accumulated large positions). 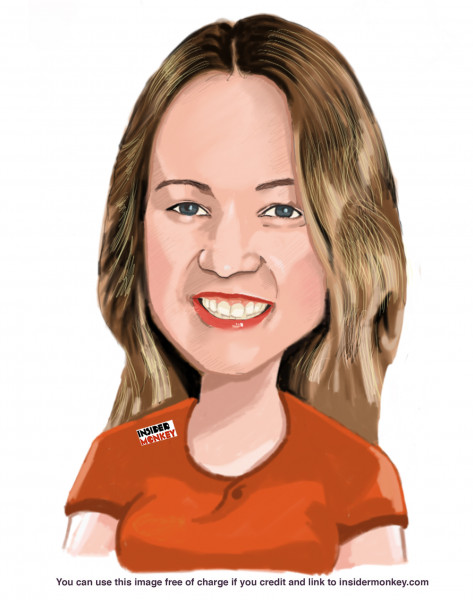 The largest stake in Carrols Restaurant Group, Inc. (NASDAQ:TAST) was held by Private Capital Management, which reported holding $22.9 million worth of stock at the end of March. It was followed by Cannell Capital with a $18.9 million position. Other investors bullish on the company included Royce & Associates, Portolan Capital Management, and Cove Street Capital.

With a general bullishness amongst the heavyweights, some big names have jumped into Carrols Restaurant Group, Inc. (NASDAQ:TAST) headfirst. Berylson Capital Partners, managed by James Thomas Berylson, initiated the most outsized position in Carrols Restaurant Group, Inc. (NASDAQ:TAST). Berylson Capital Partners had $4.1 million invested in the company at the end of the quarter. Alec Litowitz and Ross Laser’s Magnetar Capital also made a $0.6 million investment in the stock during the quarter. The other funds with new positions in the stock are Philip Hempleman’s Ardsley Partners and Anna Nikolayevsky’s Axel Capital Management.

As you can see these stocks had an average of 6.75 hedge funds with bullish positions and the average amount invested in these stocks was $42 million. That figure was $98 million in TAST’s case. Bonanza Creek Energy Inc (NYSE:BCEI) is the most popular stock in this table. On the other hand VirnetX Holding Corporation (NYSE:VHC) is the least popular one with only 3 bullish hedge fund positions. Compared to these stocks Carrols Restaurant Group, Inc. (NASDAQ:TAST) is more popular among hedge funds. Our calculations showed that top 20 most popular stocks among hedge funds returned 24.4% in 2019 through September 30th and outperformed the S&P 500 ETF (SPY) by 4 percentage points. Unfortunately TAST wasn’t nearly as popular as these 20 stocks and hedge funds that were betting on TAST were disappointed as the stock returned -8.2% during the third quarter and underperformed the market. If you are interested in investing in large cap stocks with huge upside potential, you should check out the top 20 most popular stocks among hedge funds as many of these stocks already outperformed the market in Q3.