The elite funds run by legendary investors such as Dan Loeb and David Tepper make hundreds of millions of dollars for themselves and their investors by spending enormous resources doing research on small cap stocks that big investment banks don’t follow. Because of their pay structures, they have strong incentive to do the research necessary to beat the market. That’s why we pay close attention to what they think in small cap stocks. In this article, we take a closer look at American Express Company (NYSE:AXP) from the perspective of those elite funds.

A few hedge funds sold off American Express Company (NYSE:AXP) in Q2, as ownership slipped by 10% to 47 funds. That’s down from 54 funds at the start of 2018. American Express was one of Billionaire Ken Fisher’s Top Stock Picks Heading Into 2019, ranking as the 12th most valuable position in his investment firm’s 13F portfolio. Meanwhile, fellow billionaire Dan Loeb just released a bullish investor letter about the company calling for 30% upside. 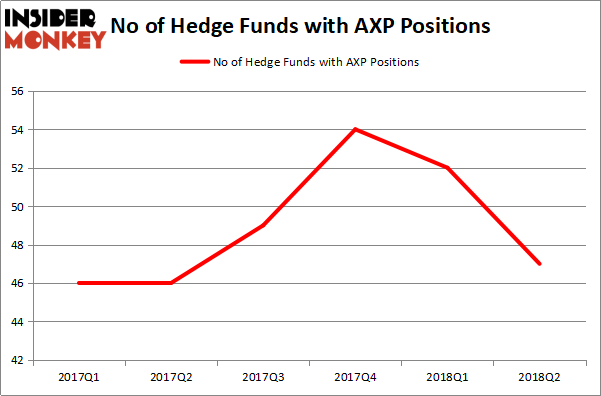 Among these funds, Warren Buffett’s Berkshire Hathaway held the most valuable stake in American Express Company (NYSE:AXP), which was worth $14.85 billion at the end of the second quarter. On the second spot was Ken Fisher’s Fisher Asset Management which amassed $990.9 million worth of shares. Moreover, Seminole Capital (Investment Mgmt), Aquamarine Capital Management, and Prana Capital Management were also bullish on American Express Company (NYSE:AXP), allocating a large percentage of their portfolios to this stock.

Because American Express Company (NYSE:AXP) has witnessed falling interest from the smart money, it’s safe to say that there were a few hedgies that slashed their positions entirely in the second quarter. At the top of the heap, Alok Agrawal’s Bloom Tree Partners dumped the largest stake of the 700 funds monitored by Insider Monkey, valued at close to $32.6 million in stock, and Paul Marshall and Ian Wace’s Marshall Wace LLP was right behind this move, as the fund said goodbye to about $6.6 million worth. These moves are intriguing to say the least, as total hedge fund interest was cut by 5 funds in the second quarter.

As you can see these stocks had an average of 53 hedge funds with bullish positions and the average amount invested in these stocks was $4.14 billion. That figure was $17.38 billion in AXP’s case. Goldman Sachs Group, Inc. (NYSE:GS) is the most popular stock in this table. On the other hand QUALCOMM, Inc. (NASDAQ:QCOM) is the least popular one with only 41 bullish hedge fund positions. American Express Company (NYSE:AXP) is not the least popular stock in this group but hedge fund interest is still below average. This is a slightly negative signal and we’d rather spend our time researching stocks that hedge funds are piling on. In this regard GS might be a better candidate to consider a long position.