Back in 1992, Richard Lockwood Chilton founded Chilton Investment Company. Apart from managing the fund, Richard Chilton is also a director of Robin Hood Foundation and a member of the Board of the Metropolitan Museum of Art. He holds a B.S. in Finance and Economics from Alfred University, and prior to founding Chilton Investment Company, he was a managing director at Allen & Company, and as a vice president and portfolio manager at Alliance Capital Management. The fund is focused on long-term success, employing long/short and long-only strategies.

Our newsletters are successful because we follow hedge fund managers like Robert Chilton to identify the best and worst hedge fund stock picks. In this article we are going to take a look at Chilton Investment Company top stock picks.

As for the second quarter of 2019, the fifth most valuable position in Chilton Investment Company’s portfolio was Mastercard Inc (NYSE:MA), boosted by 1% during the quarter. Being among the 30 most popular stocks among hedge funds in Q2 of 2019, the company was in 99 hedge funds’ portfolios. Gardner Russo & Gardner was Mastercard Inc’s largest shareholder, with a stake worth $1.8 billion. Among other top bullish hedge funds on the company were Akre Capital Management, Berkshire Hathaway, Arrowstreet Capital, and AQR Capital Management. As you can see from the chart provided by Webull, a commission free trading website, Mastercard shares were trading at $264 at the end of last quarter and returned more than 10% so far this quarter. 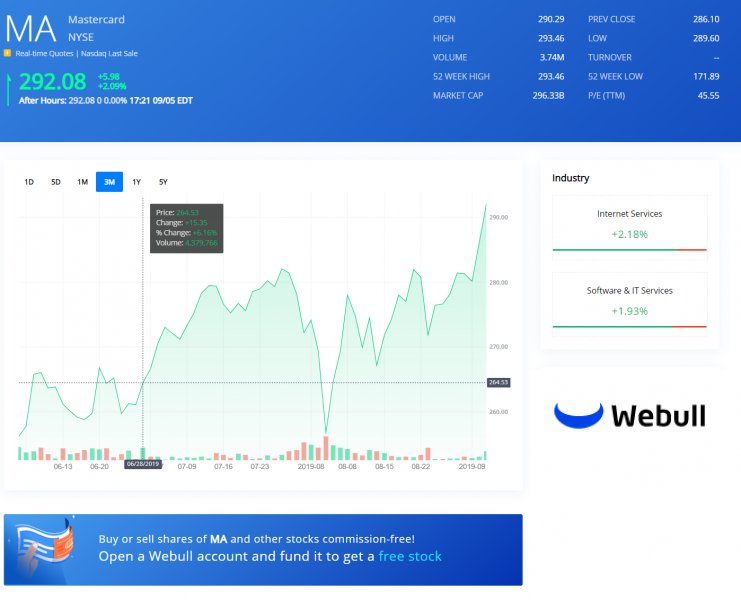 The fourth largest stock position in Chilton Investment Company’s 13F filling was Home Depot Inc (NYSE:HD). The company dropped from the third place in the fund’s portfolio, since the Robert Chilton decided to cut the position by 6% during Q2 2019. However, a total of 53 hedge funds tracked by Insider Monkey held long positions in this stock, a decrease of 8% compared to the previous quarter. Among them, Fisher Asset Management held $1009.6 million worth of stock. Other top shareholders investing in the company were Two Sigma Advisors, Arrowstreet Capital, AQR Capital Management, and Adage Capital Management.

The fund’s third top stock pick for Q2 2019 was Microsoft Corp (NASDAQ:MSFT), the second of the most popular stocks during Q1 2019 among hedge funds. A total of 167 hedge funds tracked by Insider Monkey were investing in the company, which is a decrease of 1.7% compared to Q1 2019. The company’s top shareholder for this period was Fisher Asset Management, holding shares of total value of $2789.3 million. Right behind were Eagle Capital Management, AQR Capital Management, Tiger Global Management LLC, and Adage Capital Management.

Chilton Investment Company’s second most valuable position at the end of the second quarter of 2019 was Sherwin Williams Co (NYSE:SHW). The fund lowered its stake in the company by 8% during the quarter, which brought it down from the first place in the fund’s portfolio. Among Chilton Investment Company, 39 other hedge funds were investing in the company at the end of Q2 2019, which is a decrease of 4.8% compared to the previous quarter. The company’s top shareholder was OZ Management, holding a stake worth $280.3 million. Chilton Investment Company was Sherwin Williams Co’s third largest investor, holding 439,232 shares worth $201.3 million, amassing 6.62% of the fund’s portfolio. Farallon Capital was the company’s second largest shareholder, followed by Iridian Asset Management, Senator Investment Group, and Hitchwood Capital Management.

Finally, the fund’s top stock pick for the second quarter this year was Ball Corp (NYSE:BLL), coming up one place higher in the fund’s portfolio since the previous quarter, despite being cut by 2%. A total of 27 hedge funds tracked by Insider Monkey were bullish on the stock, the same figure from the previous quarter. Among them, Chilton Investment Management held the most valuable stake, worth $210.6 million. Iridian Asset Management, Two Sigma Advisors, and Select Equity group were among the company’s other top shareholders.