Does Lloyds Banking Group PLC (ADR) (NYSE:LYG) represent a good buying opportunity at the moment? Let’s briefly check the hedge fund interest towards the company. Hedge fund firms constantly search out bright intellectuals and highly-experienced employees and invest millions of dollars on research activities, so it is no wonder why they tend to generate millions in profits each year. It is also true that some hedge fund players fail inconceivably on some occasions, but their stock picks have been generating superior risk-adjusted returns on average over the years.

Lloyds Banking Group PLC (ADR) (NYSE:LYG) doesn’t have a lot of support from the hedge funds tracked in our database, though that isn’t uncommon when it comes to the ADRs of foreign companies, which they tend to be underweight. Just 6 hedge funds were long Lloyds on June 30, down from 9 on March 31. Billionaire Ken Fisher was the biggest bull, though Fisher Investments sold off 24% of its LYG position in Q3. Nonetheless, the stock was 7th on our article: Billionaire Ken Fisher is Bullish About These Dividend Stocks, thanks to its 5.39% dividend yield.

What does the smart money think about Lloyds Banking Group PLC (ADR) (NYSE:LYG)? 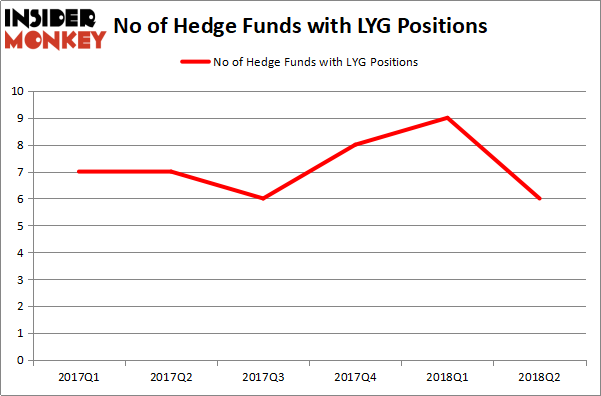 Of the funds tracked by Insider Monkey, Fisher Asset Management, managed by Ken Fisher, holds the most valuable position in Lloyds Banking Group PLC (ADR) (NYSE:LYG). Fisher Asset Management has a $394.4 million position in the stock, comprising 0.5% of its 13F portfolio. Sitting at the No. 2 spot is Jim Simons of Renaissance Technologies, with a $3.1 million position; the fund has less than 0.1% of its 13F portfolio invested in the stock. Other peers with similar optimism contain Michael Platt and William Reeves’ BlueCrest Capital Mgmt., John Overdeck and David Siegel’s Two Sigma Advisors and Israel Englander’s Millennium Management.

Judging by the fact that Lloyds Banking Group PLC (ADR) (NYSE:LYG) has experienced a decline in interest from the aggregate hedge fund industry, we can see that there were a few fund managers who were dropping their full holdings heading into Q3. At the top of the heap, Dmitry Balyasny’s Balyasny Asset Management sold off the largest stake of all the hedgies monitored by Insider Monkey, totaling about $1.1 million in stock, and Peter Rathjens, Bruce Clarke and John Campbell’s Arrowstreet Capital was right behind this move, as the fund dropped about $0.1 million worth. These bearish behaviors are intriguing to say the least, as total hedge fund interest fell by 3 funds heading into Q3.

As you can see these stocks had an average of 53 hedge funds with bullish positions and the average amount invested in these stocks was $7.51 billion. That figure was $399 million in LYG’s case. Altaba Inc. (NASDAQ:AABA) is the most popular stock in this table. On the other hand VMware, Inc. (NYSE:VMW) is the least popular one with only 37 bullish hedge fund positions. Compared to these stocks Lloyds Banking Group PLC (ADR) (NYSE:LYG) is even less popular than VMW. Considering that hedge funds aren’t fond of this stock in relation to other companies analyzed in this article, it may be a good idea to analyze it in detail and understand why the smart money isn’t behind this stock.