Legendary investors such as Leon Cooperman and Seth Klarman earn enormous amounts of money for themselves and their investors by doing in-depth research on small-cap stocks that big brokerage houses don’t publish. Small cap stocks -especially when they are screened well- can generate substantial outperformance versus a boring index fund. That’s why we analyze the activity of those elite funds in these small-cap stocks. In the following paragraphs, we analyze BlackRock, Inc. (NYSE:BLK) from the perspective of those elite funds.

Hedge fund ownership of BlackRock fell by 11% in the second quarter and even one of BlackRock’s biggest fans in the hedge fund world sold off shares in Q2, as billionaire Dan Loeb’s Third Point cut its position by 41% to 650,000 shares. Third Point took a $655 million position in the stock in the second quarter of 2017, with Loeb stating in an investor letter in July: “We think BlackRock is a misunderstood franchise that is just beginning to inflect.” The asset manager is facing slowing core revenue growth and CEO Larry Fink noted last month that the company’s low-fee index funds have suffered significant outflows. BlackRock board member William E. Ford bought 4,000 of BlackRock’s pricey shares in October, ranking 4th on our list of The 25 Biggest Insider Purchases in October. 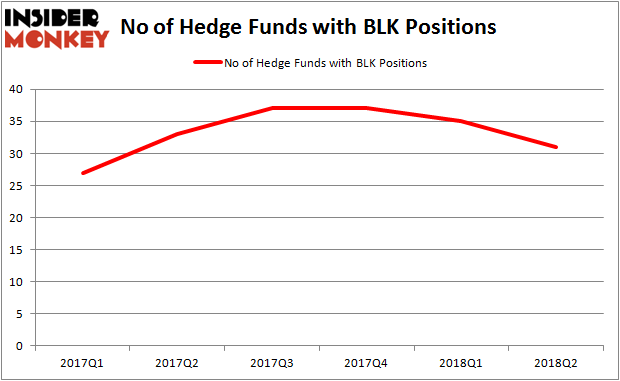 Among these funds, Third Point held the most valuable stake in BlackRock, Inc. (NYSE:BLK), which was worth $324.4 million at the end of the second quarter. On the second spot was Markel Gayner Asset Management which had amassed $95.8 million worth of shares. Moreover, White Elm Capital, Bourgeon Capital, and Trellus Management Company were also bullish on BlackRock, Inc. (NYSE:BLK), allocating a large percentage of their 13F portfolios to this stock.

Judging by the fact that BlackRock, Inc. (NYSE:BLK) has witnessed a decline in interest from the smart money, it’s easy to see that there exists a select few fund managers that slashed their entire stakes in the second quarter. At the top of the heap, Stephen Mandel’s Lone Pine Capital dropped the largest position of the “upper crust” of funds followed by Insider Monkey, totaling an estimated $497.8 million in stock. James Parsons’ fund, Junto Capital Management, also dropped its stock, about $24.7 million worth. These moves are important to note, as total hedge fund interest dropped by 4 funds in the second quarter.

As you can see these stocks had an average of 30 hedge funds with bullish positions and the average amount invested in these stocks was $6.48 billion. That figure was $883 million in BLK’s case. Lowe’s Companies, Inc. (NYSE:LOW) is the most popular stock in this table. On the other hand Westpac Banking Corporation (ADR) (NYSE:WBK) is the least popular one with only 7 bullish hedge fund positions. BlackRock, Inc. (NYSE:BLK) is not the most popular stock in this group but hedge fund interest is still above average. This is a slightly positive signal but we’d rather spend our time researching stocks that hedge funds are piling on. In this regard LOW might be a better candidate to consider a long position.