In these volatile markets we scrutinize hedge fund filings to get a reading on which direction each stock might be going. The 800+ hedge funds and famous money managers tracked by Insider Monkey have already compiled and submitted their 13F filings for the fourth quarter, which unveil their equity positions as of December 31. We went through these filings, fixed typos and other more significant errors and identified the changes in hedge fund portfolios. Our extensive review of these public filings is finally over, so this article is set to reveal the smart money sentiment towards Portland General Electric Company (NYSE:POR).

Portland General Electric Company (NYSE:POR) shares haven’t seen a lot of action during the fourth quarter. Overall, hedge fund sentiment was unchanged. The stock was in 27 hedge funds’ portfolios at the end of December. The level and the change in hedge fund popularity aren’t the only variables you need to analyze to decipher hedge funds’ perspectives. A stock may witness a boost in popularity but it may still be less popular than similarly priced stocks. That’s why at the end of this article we will examine companies such as Cree, Inc. (NASDAQ:CREE), Pan American Silver Corp. (NASDAQ:PAAS), and LG Display Co Ltd. (NYSE:LPL) to gather more data points. Our calculations also showed that POR isn’t among the 30 most popular stocks among hedge funds (click for Q4 rankings and see the video at the end of this article for Q3 rankings).

In the financial world there are a large number of signals investors have at their disposal to analyze publicly traded companies. A couple of the less utilized signals are hedge fund and insider trading sentiment. Our researchers have shown that, historically, those who follow the best picks of the elite hedge fund managers can outpace the market by a superb margin (see the details here).

We leave no stone unturned when looking for the next great investment idea. For example we recently identified a stock that trades 25% below the net cash on its balance sheet. We read hedge fund investor letters and listen to stock pitches at hedge fund conferences, and go through short-term trade recommendations like this one. We even check out the recommendations of services with hard to believe track records. Our best call in 2020 was shorting the market when S&P 500 was trading at 3150 after realizing the coronavirus pandemic’s significance before most investors. With all of this in mind we’re going to analyze the key hedge fund action regarding Portland General Electric Company (NYSE:POR).

What have hedge funds been doing with Portland General Electric Company (NYSE:POR)?

At Q4’s end, a total of 27 of the hedge funds tracked by Insider Monkey were long this stock, a change of 0% from the third quarter of 2019. The graph below displays the number of hedge funds with bullish position in POR over the last 18 quarters. With hedgies’ capital changing hands, there exists a select group of noteworthy hedge fund managers who were adding to their stakes substantially (or already accumulated large positions). 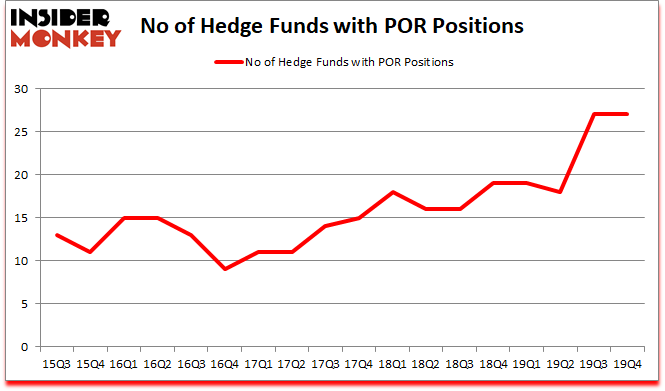 According to Insider Monkey’s hedge fund database, Renaissance Technologies holds the largest position in Portland General Electric Company (NYSE:POR). Renaissance Technologies has a $155.8 million position in the stock, comprising 0.1% of its 13F portfolio. The second largest stake is held by Millennium Management, managed by Israel Englander, which holds a $104.1 million position; the fund has 0.1% of its 13F portfolio invested in the stock. Some other professional money managers that are bullish encompass Michael Gelband’s ExodusPoint Capital, Noam Gottesman’s GLG Partners and Cliff Asness’s AQR Capital Management. In terms of the portfolio weights assigned to each position Blackstart Capital allocated the biggest weight to Portland General Electric Company (NYSE:POR), around 2.26% of its 13F portfolio. Centenus Global Management is also relatively very bullish on the stock, setting aside 1.34 percent of its 13F equity portfolio to POR.

Since Portland General Electric Company (NYSE:POR) has faced a decline in interest from the smart money, logic holds that there is a sect of money managers who were dropping their entire stakes by the end of the third quarter. At the top of the heap, Clint Carlson’s Carlson Capital sold off the biggest position of the “upper crust” of funds monitored by Insider Monkey, valued at close to $38.2 million in stock. Steve Cohen’s fund, Point72 Asset Management, also dumped its stock, about $6.9 million worth. These transactions are interesting, as total hedge fund interest stayed the same (this is a bearish signal in our experience).

As you can see these stocks had an average of 19 hedge funds with bullish positions and the average amount invested in these stocks was $223 million. That figure was $408 million in POR’s case. Pan American Silver Corp. (NASDAQ:PAAS) is the most popular stock in this table. On the other hand LG Display Co Ltd. (NYSE:LPL) is the least popular one with only 3 bullish hedge fund positions. Portland General Electric Company (NYSE:POR) is not the most popular stock in this group but hedge fund interest is still above average. Our calculations showed that top 20 most popular stocks among hedge funds returned 41.3% in 2019 and outperformed the S&P 500 ETF (SPY) by 10.1 percentage points. These stocks lost 17.4% in 2020 through March 25th but still beat the market by 5.5 percentage points. Hedge funds were also right about betting on POR, though not to the same extent, as the stock returned -21% during the first two and a half months of 2020 (through March 25th) and outperformed the market as well.