Thus far, the results unfortunately haven’t been all that stellar.  But I’m hopeful that things will pick-up relative to the S&P 500 later in the year.  Our 2012 portfolio started out with a bang, but then faded late.  Hopefully, the 2013 portfolio will have the reverse fortune.

Through the first four months of 2013, five of the ten stocks are beating the S&P 500 and five are losing.  We examined the five winners here.  Now, it’s time for the painful task of reviewing the five losers and discussing where these stocks are headed.

(All year-to-date returns discussed below include dividends.) 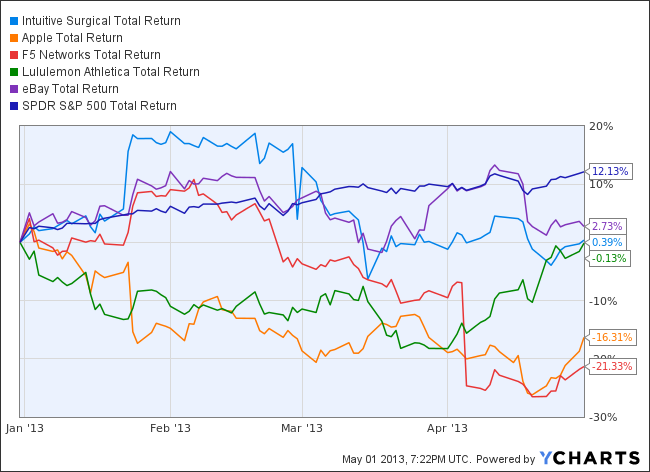 Long-term I still like eBay Inc (NASDAQ:EBAY).  The most recent pull back is providing a decent entry point into the stock; nothing spectacular, but it’s at least a small discount.  I prefer to wait for an even bigger pullback to make it a steal.

Intuitive Surgical, Inc. (NASDAQ:ISRG) is a tough one.  I’ve invested in this stock for many years now, buying whenever it got discounted and then selling after getting some nice gains.  Until recently, it was easy money.

However, the stock has sold-off lately on reports that its Da Vinci machines many not be as safe as claimed. Intuitive Surgical, Inc. (NASDAQ:ISRG) procedures, there are always things that can go wrong.  It is difficult to tell if these reports are examples of those infrequent occurrences of what can go wrong, or if they are a sign of a much larger problem.

So we have to take a step back and look at the risk and rewards, as well as Intuitive Surgical, Inc. (NASDAQ:ISRG)’s current valuation.  The valuation is the easier part.  Its current P/E of 29 is about as low as it has ever been.  And every time it has dropped down near this level, it has been a great time to buy.

For a risk and reward, the big risk is that these reports are indicative of a huge problem, resulting in a slowdown or complete stop in Intuitive Surgical, Inc. (NASDAQ:ISRG)’s growth.  The worst case would that doctors stop using the machines altogether.  We certainly have to recognize that risk.  But it’s that a fairly common risk?  Isn’t any company in danger of having their growth slow or stop at any time?  The reports of surgery complications amplify that concern for sure, but some of that risk is now priced into the stock given its most recent drop.

Intuitive Surgical, Inc. (NASDAQ:ISRG) still has a thriving business, bringing in plenty of cash flow and fortifying an already outstanding, debt-free balance sheet.  If all of the reports turn out to be something that Intuitive Surgical, Inc. (NASDAQ:ISRG) can fix, mitigate or otherwise overcome, then the stock will be off to the races.  I’m inclined to use this as yet another great buying opportunity.  If a market sell-off were to drive the stock down further, then that’s even better.

I’ll head straight to the punch-line on Lululemon Athletica inc. (NASDAQ:LULU).  This maker of yoga apparel is a great buy.  I did a separate story on this stock recently here.  The stock sold-off when it had to recall some of its yoga pants because they were too sheer.  Never mind that the company continues to rake in cash, has a loyal following in a niche market, and has a P/E of 41, which, while high, is about as low as it has been in a while.  Lululemon Athletica inc. (NASDAQ:LULU)’s stock tends to give you a lot of pull-backs like that after misinterpreted earnings results.  If we get another one, this is a great stock to buy.  I expect this one to play catch-up through the rest of 2013.

Oh, Apple Inc. (NASDAQ:AAPL).  What an amazing stock.  Have you ever seen such a wild ride in a company this large?  What a roller coaster it has been the past 16 months!

There’s no denying that Apple Inc. (NASDAQ:AAPL)’s earnings and cash flow have started to level off.  It seems that its days of huge growth are clearly behind it.  How can we expect them to keep up that growth rate?

I’ll take that every day of the week and twice on Sunday.  Sign me up.  This is a great opportunity for anyone who’s been patiently waiting to buy Apple Inc. (NASDAQ:AAPL).  I think the stock will rise again in 2013 when the market figures out that Apple Inc. (NASDAQ:AAPL) isn’t toast.  It won’t be a party like the first nine months of 2012, but there will be gains to be had.