A whopping number of 13F filings filed with U.S. Securities and Exchange Commission has been processed by Insider Monkey so that individual investors can look at the overall hedge fund sentiment towards the stocks included in their watchlists. These freshly-submitted public filings disclose money managers’ equity positions as of the end of the three-month period that ended September 30, so let’s proceed with the discussion of the hedge fund sentiment on AppFolio Inc (NASDAQ:APPF).

Is AppFolio Inc (NASDAQ:APPF) going to take off soon? Prominent investors are getting less bullish. The number of long hedge fund positions dropped by 1 in recent months. Our calculations also showed that APPF isn’t among the 30 most popular stocks among hedge funds (click for Q3 rankings and see the video below for Q2 rankings).

We leave no stone unturned when looking for the next great investment idea. For example Discover is offering this insane cashback card, so we look into shorting the stock. One of the most bullish analysts in America just put his money where his mouth is. He says, “I’m investing more today than I did back in early 2009.” So we check out his pitch. We read hedge fund investor letters and listen to stock pitches at hedge fund conferences. We even check out this option genius’ weekly trade ideas. This December we recommended Adams Energy  based on an under-the-radar fund manager’s investor letter and the stock gained 20 percent. We’re going to take a look at the recent hedge fund action regarding AppFolio Inc (NASDAQ:APPF).

What have hedge funds been doing with AppFolio Inc (NASDAQ:APPF)?

At Q3’s end, a total of 11 of the hedge funds tracked by Insider Monkey were bullish on this stock, a change of -8% from the previous quarter. On the other hand, there were a total of 19 hedge funds with a bullish position in APPF a year ago. With the smart money’s sentiment swirling, there exists a select group of notable hedge fund managers who were boosting their stakes considerably (or already accumulated large positions). 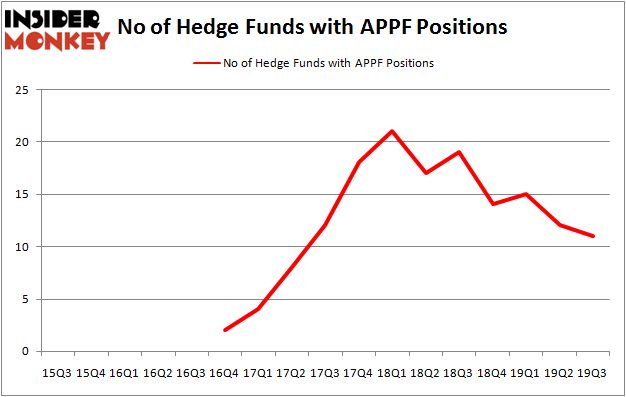 When looking at the institutional investors followed by Insider Monkey, Ashe Capital, managed by William Crowley, William Harker, and Stephen Blass, holds the biggest position in AppFolio Inc (NASDAQ:APPF). Ashe Capital has a $152.2 million position in the stock, comprising 11.6% of its 13F portfolio. The second most bullish fund manager is Echo Street Capital Management, managed by Greg Poole, which holds a $37.5 million position; 0.6% of its 13F portfolio is allocated to the stock. Remaining members of the smart money that hold long positions comprise Renaissance Technologies, Peter Rathjens, Bruce Clarke and John Campbell’s Arrowstreet Capital and Louis Navellier’s Navellier & Associates. In terms of the portfolio weights assigned to each position Ashe Capital allocated the biggest weight to AppFolio Inc (NASDAQ:APPF), around 11.63% of its 13F portfolio. Echo Street Capital Management is also relatively very bullish on the stock, designating 0.64 percent of its 13F equity portfolio to APPF.

Because AppFolio Inc (NASDAQ:APPF) has experienced falling interest from the entirety of the hedge funds we track, it’s easy to see that there were a few fund managers who were dropping their entire stakes heading into Q4. It’s worth mentioning that Alexander Captain’s Cat Rock Capital dropped the biggest investment of all the hedgies tracked by Insider Monkey, worth an estimated $5.1 million in stock, and Bruce Kovner’s Caxton Associates was right behind this move, as the fund dumped about $1 million worth. These moves are important to note, as aggregate hedge fund interest was cut by 1 funds heading into Q4.

As you can see these stocks had an average of 19.25 hedge funds with bullish positions and the average amount invested in these stocks was $236 million. That figure was $212 million in APPF’s case. Viavi Solutions Inc (NASDAQ:VIAV) is the most popular stock in this table. On the other hand Balchem Corporation (NASDAQ:BCPC) is the least popular one with only 7 bullish hedge fund positions. AppFolio Inc (NASDAQ:APPF) is not the least popular stock in this group but hedge fund interest is still below average. Our calculations showed that top 20 most popular stocks among hedge funds returned 37.4% in 2019 through the end of November and outperformed the S&P 500 ETF (SPY) by 9.9 percentage points. A small number of hedge funds were also right about betting on APPF as the stock returned 18.7% during the first two months of Q4 and outperformed the market by an even larger margin.