Share Tweet Email
Page 1 of 5
Next >>
Update on 3.9/20: In a sign of how volatile times are, over the weekend, oil prices plummeted to close to $30, the treasury bond rate to less than 0.4% and the market looks set to drop substantially. A work in progress indeed….

I wrote a post on how the Corona Virus was playing out in markets on February 26, two days into the market going into convulsions, and while I tried to make an assessment of the value effect, I also said that this analysis was a work in progress, that I would revisit as we learned more about the virus and its economic consequences. Eleven days later, we still don’t have clarity on the health or economic effects of the virus, but we do have substantially more data on what the market reaction has been. In this post, I will begin by doing a quick update on the viral spread across the world, but spend more time on the market damage, looking at where it has been greatest, seeking clues for the future.

A Virus Update
In the last week and a half, the virus has clearly expanded its global footprint, with Italy and South Korea now in the front lines, in terms of exposure, but with the numbers climbing rapidly across the rest of the world, it is clearly now on its way to becoming a global pandemic.
While the word “pandemic” alone is often enough to drive us to panic, it is not the first, nor will it be the last, and it helps to gain perspective to compare it to pandemics in the past, both in terms of contagion and health consequences. This chart from the New York Times reflects what we know about the virus as of February 28, 2020: 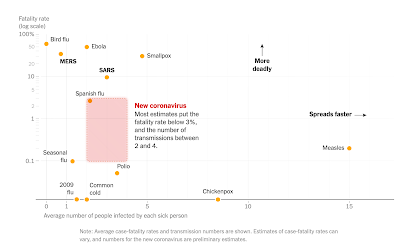 Note that the large band of uncertainty around the fatality rate related to the virus, reflecting how little we know about its potential consequences and how it measures up against other viruses in terms of contagion. Put simply, this is not just the common flu with side effects, as some have argued, but it is perhaps not the deadly killer that others at the other extreme has painted it as. The X factor that makes this virus potentially more difficult to contain and more likely to have global consequences is globalization, one more argument that populists will undoubtedly use to argue against it. The reality is that travel, especially across borders and continents, is not only easier than ever before but also more affordable, as income levels rise in the developing world. Over the next few weeks, it is likely that we will see the case numbers rise dramatically in countries which have been hitherto exposed only lightly to the virus, the fatality numbers will rise among those affected, and health systems around the world will come under pressure.
Share Tweet Email
Page 1 of 5
Next >>