A. O. Smith Corporation (AOS): Are Hedge Funds Right About This Stock?

A. O. Smith Corporation (NYSE:AOS) was in 29 hedge funds’ portfolios at the end of December. AOS has experienced a decrease in hedge fund interest lately, though overall hedge fund sentiment is still near its all time high. There were 33 hedge funds in our database with AOS positions at the end of September. Our calculations also showed that AOS isn’t among the 30 most popular stocks among hedge funds.

If you’d ask most shareholders, hedge funds are assumed to be underperforming, old investment tools of yesteryear. While there are more than 8000 funds trading at the moment, Our experts look at the moguls of this club, about 750 funds. Most estimates calculate that this group of people preside over bulk of all hedge funds’ total asset base, and by watching their matchless equity investments, Insider Monkey has found various investment strategies that have historically defeated the market. Insider Monkey’s flagship hedge fund strategy outrun the S&P 500 index by nearly 5 percentage points annually since its inception in May 2014 through early November 2018. We were able to generate large returns even by identifying short candidates. Our portfolio of short stocks lost 27.5% since February 2017 (through March 12th) even though the market was up nearly 25% during the same period. We just shared a list of 6 short targets in our latest quarterly update and they are already down an average of 6% in less than a month.

At the end of the fourth quarter, a total of 29 of the hedge funds tracked by Insider Monkey were long this stock, a change of -12% from one quarter earlier. Below, you can check out the change in hedge fund sentiment towards AOS over the last 14 quarters. With hedge funds’ sentiment swirling, there exists a few key hedge fund managers who were increasing their holdings substantially (or already accumulated large positions). 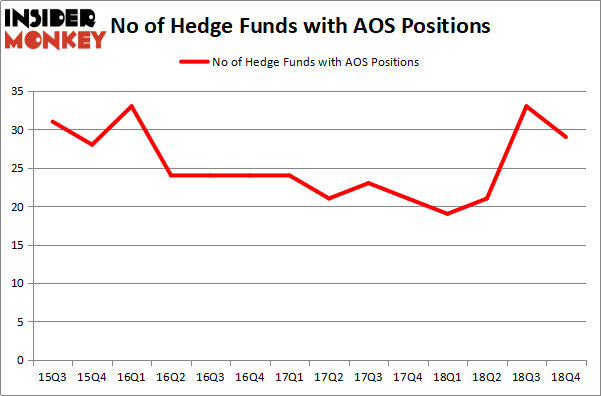 Among these funds, Impax Asset Management held the most valuable stake in A. O. Smith Corporation (NYSE:AOS), which was worth $182.9 million at the end of the third quarter. On the second spot was Two Sigma Advisors which amassed $81.6 million worth of shares. Moreover, Millennium Management, Point72 Asset Management, and Select Equity Group were also bullish on A. O. Smith Corporation (NYSE:AOS), allocating a large percentage of their portfolios to this stock.

Because A. O. Smith Corporation (NYSE:AOS) has witnessed falling interest from the entirety of the hedge funds we track, it’s easy to see that there were a few hedgies who were dropping their entire stakes by the end of the third quarter. At the top of the heap, Paul Marshall and Ian Wace’s Marshall Wace LLP said goodbye to the biggest position of all the hedgies followed by Insider Monkey, valued at about $31.8 million in call options, and Steve Cohen’s Point72 Asset Management was right behind this move, as the fund dumped about $6.7 million worth. These moves are interesting, as total hedge fund interest dropped by 4 funds by the end of the third quarter.

Let’s also examine hedge fund activity in other stocks – not necessarily in the same industry as A. O. Smith Corporation (NYSE:AOS) but similarly valued. We will take a look at Molina Healthcare, Inc. (NYSE:MOH), Under Armour Inc (NYSE:UA), Israel Chemicals Ltd. (NYSE:ICL), and XPO Logistics Inc (NYSE:XPO). This group of stocks’ market valuations are closest to AOS’s market valuation.

As you can see these stocks had an average of 25.75 hedge funds with bullish positions and the average amount invested in these stocks was $1056 million. That figure was $504 million in AOS’s case. XPO Logistics Inc (NYSE:XPO) is the most popular stock in this table. On the other hand Israel Chemicals Ltd. (NYSE:ICL) is the least popular one with only 5 bullish hedge fund positions. A. O. Smith Corporation (NYSE:AOS) is not the most popular stock in this group but hedge fund interest is still above average. Our calculations showed that top 15 most popular stocks among hedge funds returned 21.3% through April 8th and outperformed the S&P 500 ETF (SPY) by more than 5 percentage points. Hedge funds were also right about betting on AOS as the stock returned 29.9% and outperformed the market as well.