6 Easiest Brass Instruments to Play in a Band

I failed at the saxophone so I don’t need the 6 easiest brass instruments to play in a band. But maybe you do. Maybe you, unlike me, did not fail at saxophone. Maybe you will pass or even succeed! Think of the heights someone who is not me could reach playing the saxophone–such heights!

I played it for two weeks in the 6th grade and it wasn’t pretty. A saxophone requires a wooden reed which is like half of a tongue depressor–only one hundred million times thinner. I broke it basically every time I touched the instrument and my miserly music teacher made me purchase more from him at 50 cents a pop. Mind you, 50 cents just happens to be the exact price of the cafeteria ice cream bars, so I don’t think I’m wrong to suspect a conspiracy. While playing I had to have my back to my “audience” usually some poor family member, not because of stage fright, but so I wouldn’t start laughing. I also complimented my routines with a slightly cracked gray plastic fedora. The image of a thin 6th grader plugging away at the sax wearing a broken plastic top hat must have been absolute class. 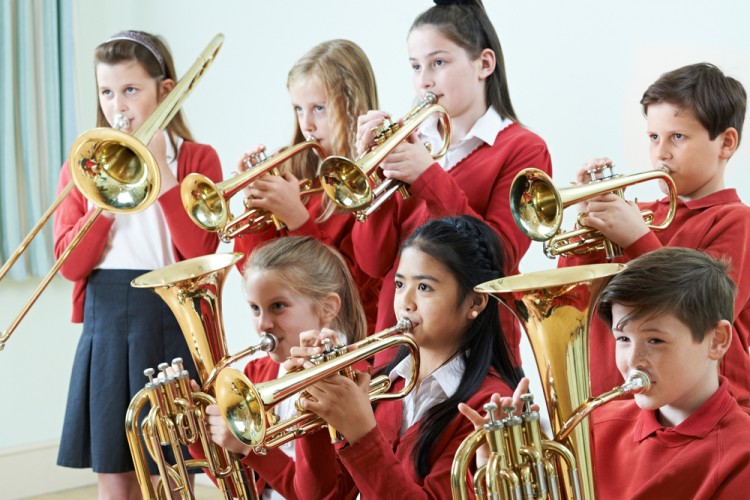 However, if you are looking for a new creative hobby for you or your child, you may want to check our list of 6 easiest brass instruments to play in a band. Brass instruments are the ones made fully out of brass looking like long pipes, that widen at the end in a shape of a bell. They are played by buzzing lips against the metal mouth part. There are valves on the pipes which open and close different parts of the pipe creating the wider range of sounds, along with buzzing lips harder or softer. If brass instruments aren’t your tune then check out 10 Easiest Instruments to Learn How to Play.

They are mostly used by marching band players, jazz musicians, and the orchestra members where they are described as the loudest of all instruments. The first time they were introduced to a wider audience as a part of the orchestra of classical music was when presenting Beethoven’s Fifth Symphony. The first two major British Brass Bands were Besses o’ th’ Barn Band and the Black Dyke Mills Brass Band. What makes brass instruments perfect for the musical beginners is initially their physical structure. Long curved pipes with only a few valves each allow the player to easily handle it and control it by mostly using his own breath. For making a sound you don’t need to lose your breath. Choosing between deeper and shallower breath is your own choice and you make it by deciding whether you want louder or a softer sound.

According to the public opinion, the most popular brass instruments include tuba, french horns, euphonium, trombone, saxophone, trumpet, cornet, bass trombone, baritone horn and air horn. Each of them has specific sounds and way of playing, but all of them make a richer musical experience.

Learning to play any of the brass instruments requires plenty of time to practice, but they are not as hard as they seem to be. That’s why they are highly recommended by most instructors.

Share Tweet Email
Page 1 of 7
Next >>
Related Insider Monkey Articles
15 Smartest Countries In Science, Not Math7 Easiest and Most Common Fake ID States10 Countries With The Highest Youth Suicide Rates In The World
8 Best Smartphones With A Stylus5 Best Stocks To Buy Now19 Best Free News Apps For iPhone and Android in 2017