Hey hot stuff, here are the 25 best states for firefighters. Firefighters are incredibly cool and brave–I mean, I had to put my face down by the oven to remove a tray of cookies and I literally could not take the heat. Seriously, I am more than thankful there are people in the world who put their lives on the line for humans like me, someone who will faint during the first 90-degree day of summer.

My wife’s cat also likes firefighters (fine, he is also my cat, but we’re really more like roommates–I’m a dog person). Recently a fireman had to walk through our apartment to check out the building’s backyard and I’ve never seen a cat so transfixed. He galloped alongside the fireman, nearly clinging to his boot, and then tried to seduce him by batting his eyes and stretching out his body.

Once the fireman left, the cat sprinted to the window to watch them ready their trucks. Other firefighters have been outside since and our cat, without fail, stares at them like steaks. What I’m saying is my cat wants to have a fireman’s baby. It’s understandable that he would be so ensorcelled.  They’ve got it all, bravery, uniforms, a lack of heat sensitivity–what’s not for a cat, or any species to love? If you know of any single firemen send them my cat’s way. Not sure what he’d do besides sleep in their helmet or get fur all over them, but there’s only one way to find out. 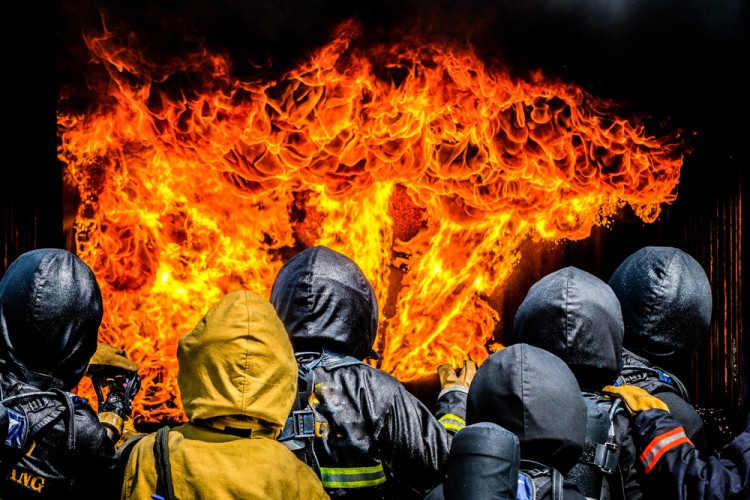 Clearly, firefighting is a very important job. There are many types of firefighters including those who run the hook and ladder in cities and towns and those who battle wildfires from helicopters throughout rural landscapes. There are salaried firefighters and volunteers. They have to meet difficult physical requirements and pass testing in order to be allowed to work the job. For those that are salaried, there are certain states where is it better to live, particularly due to wages.

When the wind starts to blow the fire, brave men and women firefighters step up to deal with it and become heroes of the nation. During the history, many heroic stories happened and this is the 8 Heroic Rescue Stories Throughout History Like Cedric Herrou. According to United States Department of Labour, in the USA, works 318,790 firefighters. Average hourly wage is $24 and the yearly wage is $49.330. But to find the best place for firefighters, we had to use the data for each individual state, compare it with living cost index and find out the best relation between cost of living and worker earnings. The highest salary doesn’t guarantee that some firefighter would live properly and have enough money to cover all living costs.

Here is the list of 25 best states for firefighters: