Share Tweet Email
Page 1 of 17
Next >>
16 Military Spending Facts That Will Blow Your Mind about the world’s most powerful country. The U.S is the strongest military power on the planet, with the best funded and most sophisticated defense forces. It is also the biggest spender on defense, with $596 billion allocated towards the military in 2015, dwarfing the second-biggest spender, China. The U.S military budget spends money on the four branches of the country’s defense forces – the Army, Marine Corps, Navy, and Air Force. Some of the most noteworthy companies to benefit from this spending are Raytheon Company (NYSE:RTN), Lockheed Martin Corporation (NYSE:LMT), General Dynamics Corporation (NYSE:GD), Boeing Co (NYSE:BA), and Northrop Grumman Corporation (NYSE:NOC)
Despite the large expenditure on defense, the percentage spend of U.S GDP on the military remains well below what it was during times of war. In 2015, the U.S spent approximately 3.3% of its GDP on the military, which accounted for about 54% of the U.S’ fiscal year 2015 discretionary budget. The huge size of the U.S economy allows it to be the biggest spender on arms and defense equipment without overly straining taxpayers.
The defense budget has nearly doubled since 2000, when it was around $330 billion. U.S defense forces have potent capabilities in both defense and power, with more than 737 military bases spread all over the globe. Though the U.S does not have compulsory military service for its citizens, there are many countries that do. If you’re interested in finding out which ones they are, check out the 10 strongest countries with compulsory military service, which includes nations such as Iran and Taiwan.
Besides spending on defense, the U.S spends another ~$20 billion a year on the upkeep of its nuclear arsenal. Expenses from the country’s wars with Afghanistan and Iraq are also not accounted for in the general defense budget, being funded through separate spending bills. A number of other programs, such as pensions for military veterans, intelligence activities, homeland security, and counter terrorism activities are also not included in the military budget ($218 billion to $262 billion annual spend). If these expenses were combined with the normal military budget, then total U.S defense spending would be much higher. 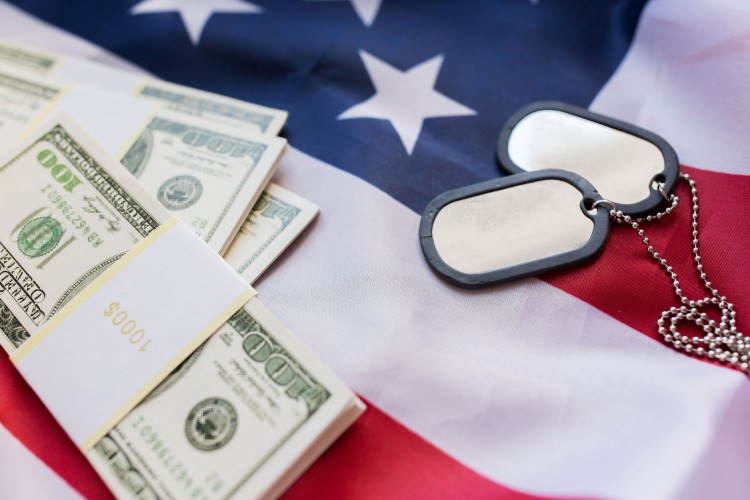 As per a Department of Defense budget proposal for fiscal year 2017, $147 billion was allocated for the Army, $169 billion for the Navy and Marine Corps, $162 billion for the Air Force, and $103 billion for defense-wide spending. By function, $138.6 billion was requested for personnel, $244.4 billion for operations and maintenance, $118.9 billion for procurement, $69 billion for research and development, $1.3 billion for revolving and management funds, $6.9 billion for military construction, and $1.3 billion for family housing. This budget is slated to fund an Army of 460,000 soldiers in the active Army, 335,000 soldiers in the Army National Guard, and 195,000 soldiers in the Army Reserve in FY 2017. It will also fund a Marine Corps of 182,000 active-duty Marines and 38,500 Marine reservists. The budget also supports an Air Force of 491,700 active-duty, Reserve and National Guard Airmen, and includes 55 tactical fighter squadrons. Total U.S defense personnel, including those in reserves, is almost 2.5 million, which makes it one of the world’s largest armies in terms of absolute numbers.
Military spending accounts for a lion’s share of the U.S’ discretionary spending, at 54%. In comparison, education and healthcare only get a 6% allocation each, while energy and science spending get only a 3% allocation. Veteran’s benefits, which should ideally be included in the military budget, gets a whopping $65 billion allocation, making it 4th-largest spending item.
Besides being the world’s biggest spender on military equipment, the U.S is also the biggest exporter of arms and ammunition to the rest of the world. Its huge domestic expenditure on its military has spawned a large number of giant defense companies which manufacture some of the best weapon systems in the world. The F-16 fighter aircraft manufactured by Lockheed Martin Corporation (NYSE:LMT)
is one of world’s most popular fighters and used by the air forces of a number of countries in the world today. Large U.S defense manufacturers produce a wide variety of tanks, missiles, assault rifles, bombers, surveillance aircraft and electronic systems, which are exported to U.S allies around the world.
Follow Lockheed Martin Corp (NYSE:LMT) Follow Lockheed Martin Corp (NYSE:LMT)
We may use your email to send marketing emails about our services. Click here to read our privacy policy.
In this article, we present 16 military spending facts that will blow your mind. It’s beginning on the next page.
Share Tweet Email
Page 1 of 17
Next >>
Related Insider Monkey Articles