Get ready for the next blowing party and learn the 16 best karaoke songs for bad singers.

Let’s first begin with some fun facts. You probably do not know the origins of the word “karaoke.” Karaoke is a Japanese word which can be translated to something like empty singing with an orchestra (kara-empty, oke-orchestra). Karaoke was “invented” in the seventies by Daisuke Inoue who made a first karaoke machine so that he could “teach people how to sing.” The other reason Daisuke invented karaoke is that, as he says, he was the worst musician ever, and while playing drums at a local bar in Kobe he wanted to make his life easier by creating a machine that could do the work for him. Back then he couldn’t have dreamed that his invention would become one of the most popular entertainment devices. 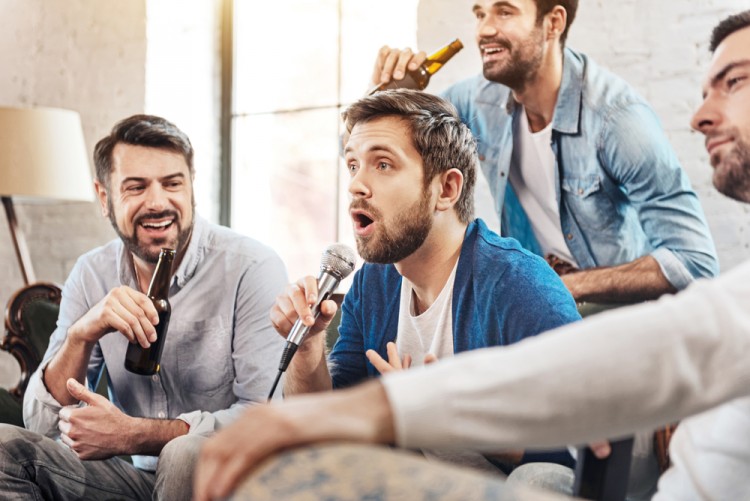 Since you are here looking for the easy karaoke songs to sing, that means you have no problem with socializing and being silly because you want to show your skills no matter how bad they might be. That can also mean that no matter what the choice of the song is, you will take it up until the end.

But on the other hand, maybe you really like singing, and you spend a long time in shower pretending to be the frontman of your favorite band or opera soloist, but your singing skills remain behind your bathtub curtains. And if that is the case, breaking the ice might be hard for you since psychology is a nasty thing. So in that case, singing karaoke represents a huge barrier even though singing is your passion, and you are a bad singer. But no worries, just relax and take that microphone. Anyway, whatever the case might be, maybe you really should first reconsider the best karaoke songs if you can’t sing for the beginning, and that’s why we are here today.

We will try to encompass here both easy karaoke songs for females and easy karaoke songs for guys, but also those who can be sung in duet and with the crowd.  To spice things out, you will also get some ideas for easy songs to sing Hindi as well here. But, since there is plenty of choices wherever you search for best songs for bad singers, you might also check 15 Best Karaoke Songs for People Who Can’t Sing and 11 Best Karaoke Songs for People Who Can’t Sing before proceeding down on our today’s compilation.

Honestly, any song can be sung on karaoke no matter how good or bad singer you are, since karaoke should be all about having fun and socializing. Nevertheless, we are here to pick the really easy ones for those who are really bad in singing. So we have sought for the recommendations on many places, looking both for best karaoke songs if you can’t sing and easy karaoke songs for beginners. Some of the resources we sought for help were Xojane, Lucky Voice Karaoke, Supercall, and BuzzFeed. And in the end, we have added some personal favorites as you will see further on the list, as well as recommendations from Quora because it really is a choice of personal preferences and the atmosphere at your party/karaoke night or wherever you are singing it.

We have tried to cover as many genres as we could with the today’s list so everyone can find the suitable song to start with. But if you can’t sing even the songs you will see below, it doesn’t matter, having a good time is the more important thing here. But anyway, let’s see which those best karaoke songs for bad singers are:

Let’s start our compilation of the best karaoke songs for bad singers with one fun disco song of the seventies. When it was released, it was a total boom and has topped charts in many countries. It is widely recognized nowadays as well, and hence it is a great choice for karaoke parties.