Rattlesnakes are very well recognized venomous snakes, and here we have listed 11 most venomous rattlesnake species in the world. Rattlesnakes are native snakes to the Americas, being spread from Canada throughout Central and South America. Rattlesnakes count 36 species with many subspecies (the figure ranging between 65 and 70) and many regional variations in coloration.

Rattlesnakes belong to the group of snakes known as pit vipers, named like that because of special pits between their eyes and nostrils. Those pits have the role of sensing the differences in heat, by which pit vipers can detect their prey. Rattlesnakes are divided into two genera – Crotalus and Sistrurus, which are terms derived from the Greek language referring to their rattles. Rattlesnakes of Sistrurus genus are more primitive forms and inhabit southeastern parts of the Northern America, where many of the most venomous rattlesnakes in the world dwell, while Crotalus rattlesnakes are more advanced and more numerous, representing the majority of rattlesnakes and are spread from Canada to Argentina. 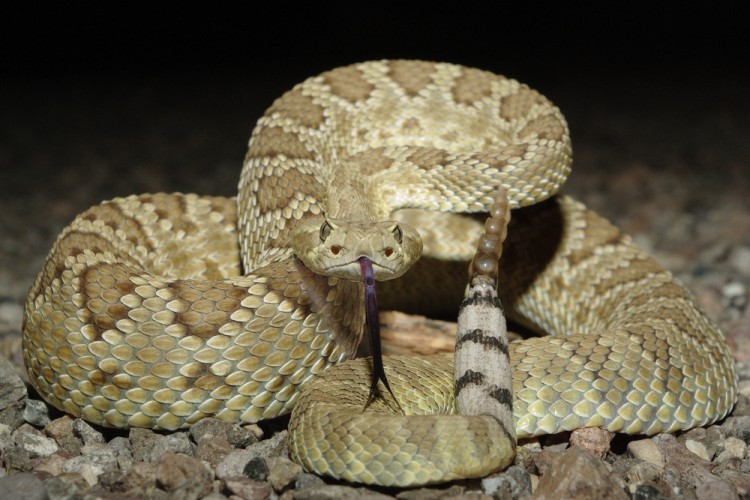 These snakes are unmistakably recognized by their rattles. Rattles have evolved from modified tail scales, and represent hollow segments of modified scales made of keratin. By contracting special muscles which these snakes have developed, rattle segments rub against each other producing clattering sound.

Some common physical characteristics of rattlesnakes, apart from the rattle are, broad triangular head, vertical pupils, usually large thick body, large fangs that fold when the snake opens its mouth, which can gape up to 180 degrees. Their scales are usually ridged, and although their coloration varies, many rattlesnake species have diamond-like patterns.

Having met the main characteristics of rattlesnakes, the question now is how to decide which rattlesnake species is the most venomous one? The method that scientists agree on how to decide which venom is the strongest one is the unit that shows the amount of venom needed to kill a living creature. That unit is called LD50, where LD stands for a lethal dose, and 50 for the 50% of kills per test sample (in this case laboratory mice). It is expressed in units that represent how much milligrams of venom is needed per kilogram of the victim in order to kill it. We have followed the data given from the Untamed Science and the Australian Venom research Unit. We have compared LD50 values and made this list in order that follows LD50 values – the lower the LD50 value, is the stronger the venom is. So, this list refers to rattlesnake venom strength, not the lethality in humans and other animals.

If you are eager to find out which other snakes apart from rattlesnakes are the most venomous, you can check our list of 20 Most Venomous Snakes in the World. Rattlesnakes are highly venomous snakes, and many do inflict bites to humans, sometimes even with the lethal outcome, but generally, if left alone, these snakes will not attack first and will try to avoid contacts. That is why they have their rattles on the first place, to warn the intruders to keep away. Let’s now go through most venomous rattlesnake species in the world that can be met.