There are around 150 snake species (with many subspecies) native to the North America, 20 of which are venomous, that are unevenly distributed throughout the continent, and here we have listed 10 states with the most venomous snakes in America.

Venomous snakes of the US are divided into four main groups: rattlesnakes (16 species), copperheads (one species), cottonmouths (one species) and coral snakes (2 species). Many of these species include a lot of regional varieties and subspecies. All of these snakes belong to pit vipers of the Viperidae family except coral snakes, which belong to the Elapidae snake family.

Pit vipers are a huge snake family that includes around 150 species which are spread throughout the most of the world except Antarctica, Africa and Australia, and therefore have adapted to many different ecosystems. What all pit vipers have in common is the “pit” placed between the eyes and the nose of the snake. The pit acts as a sensor which helps them to locate prey or other living creatures by heat (thermoreceptors), which means that snakes can detect differences in temperature around them. Pit vipers are also very venomous snakes, where tropical species have significantly stronger venom than those who inhabit areas with a milder climate. Cottonmouths are semi-aquatic snakes and together with copperheads, massasaugas and pygmy rattlesnake, they are often found around water bodies and generally inhabit more humid places. Other rattlesnake species are found in many different habitats, from forests to deserts, but preferring regions with a warmer climate, so they are most widely distributed throughout the southern part of the US. 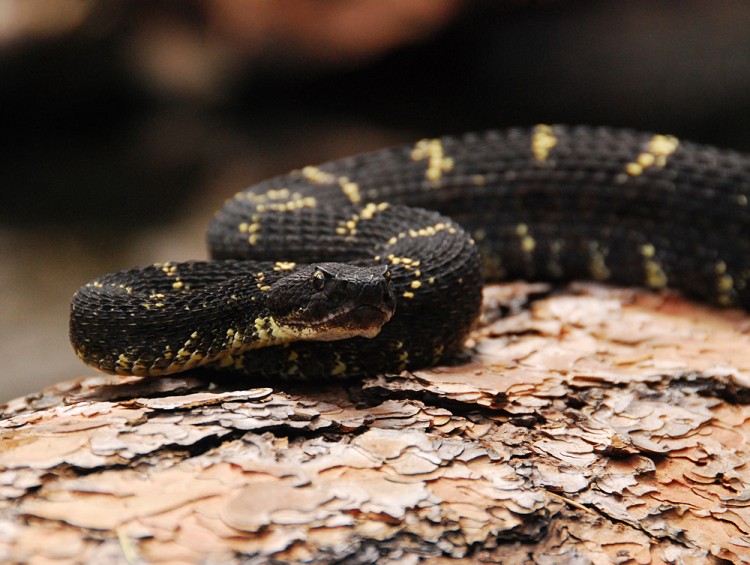 Coral snakes belong to the Elapide family of snakes, like cobras. Coral snakes inhabit various environments including forests, rocky areas, even flooded plains, and are very common snakes even in urban areas, therefore being present in the majority of states with the most venomous snakes in America. They are most common in southern parts of the US where they inhabit woods, sandy and marshy areas. Coral snakes are tiny and slender snakes, reaching up to 39 inches in length. They are also vividly distinguishable from other snake species by their contrasted black, yellow and red bands across the body, but are sometimes confused with non-venomous king snakes. Although they are common and highly venomous, these are shy snakes so they are rarely seen and encountered by humans.

Most numerous of the pit vipers in the US are rattlesnakes, and they are also the largest venomous snakes in the US. Of them, most venomous are considered to be the tiger rattlesnake and the Mojave rattlesnake. The bite of a Mojave rattlesnake can kill a human if not being medically treated, because this snake injects a huge portion of venom when biting; this snake will not hesitate to attack. Although some of them are highly venomous, North American snakes are not at the top of the Most Venomous Snakes in the world.

In order to have consistent information in terms of species – subspecies hierarchy, we have collected the data from Venombyte and Cobras to make our final count. We have picked states with the most venomous snakes by highest numbers from either website. The numbers thus may vary comparing to some other sources, but the list we made also includes subspecies (like copperhead and cottonmouth subspecies or regional rattlesnake varieties for example). Our list represents states with the most venomous snakes in America by the number of (sub)species, not by encounters with humans or fatal bites. Of around 9,800 annual snakebites in the US, of which roughly 3,000 are from venomous snakes, the majority is usually being inflicted by improper handling with snakes, since many snakes dwell around urban areas.

Although snakes are found in most parts of the world, they are most abundant in regions with a warmer climate, where they inhabit a variety of ecosystems from rainforests to deserts. Venomous snakes are present in almost every state except Alaska and Hawaii (where there are no native snake species at all), and tend to inhabit warmer regions of the southern half of the US. Florida is considered to be the state with the most snake species in the US, but is it also the number one state with the most venomous snakes in America? Let’s find out on our list.