In a country that is referred to as melting pot there is a huge number of Hindu people which are known as one of the biggest population in the world, so we wondered: which are the most famous Hindu temples in America?

America, having in mind just the USA, has a Hindu population of around 2.69 million according to statistics from 2008. Among other countries such as Nepal and India, the USA is also one of 11 Countries with Highest Hindu Population, according to our previous research. As there are no official governmental statistics, because US Census doesn’t collect data on religion, this estimation is made more by national polls. However, according to Besheer Mohamed, senior researcher at Pew Research Institute in 2016 there were 2.1 million Hindus. By realizing that these numbers are 0.4% of the entire America’s population, then what do you think – how many Hindu temples can we find in America? 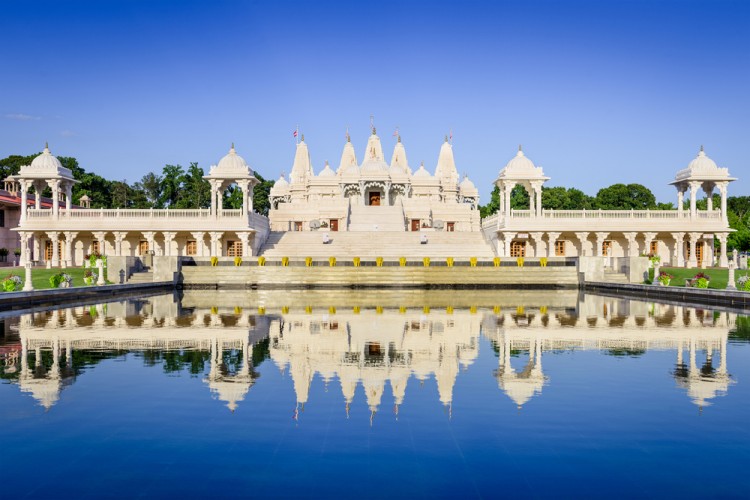 They differ in sizes, architecture, design and age. However, all of them are functional and open to the public. They run various Youth Programs, Programs for Children, celebrate their festivals and have many other ceremonies. The construction of the first Hindu temple in America began in 1970, and it was over in 1977. The name of the temple is Sri Maha Vallabha Ganapati Devasthanam, more known as Ganesh Temple, which can be found in Flushing, New York. Today, it serves as the Hindu Temple Society of North America.

Hindu temples represent sacred places for people who believe in Hinduism, with the main idea of gathering people and Gods. The process of their building, having in mind motifs, and geometric symbols, reflects beliefs and values of Hindu religion. They represent spiritual shelter as well as a place of community gathering where people could rebuild their energy.

However, process of building wasn’t always the same. In ancient times, first temples were built out of clay with roofs that were made of straw or leaves, whereas in the mountains you could find temples hidden in caves. Later, stones and bricks became most used material until today. Architecture of each of them varies a lot, so much that for example Hindu temples in Northern India are different from the ones in Southern parts of the country. Nevertheless, all of them have many things in common, such as the dome and steeple, the inner chamber, the temple hall, the front porch, the reservoir and the walkaway.

Out of 254 Hindu temples in the USA, we selected 10 most famous. How? Simply, we browsed the Internet and picked the most frequently mentioned on similar lists.

Currently, the biggest Hindu temple in the world is Angkor Wat in Cambodia with amazing 820 000 m2, but not for long. India is building the world’s largest temple that will have approximately 379 feet tall spreading across 200 acres of land. Until we wait for his architectural miracle, here is the list of most famous Hindu temples in the USA.