From hearing about (and maybe even watching) Shark Week on Discovery Channel every year, we all know that people love watching videos of shark attacks, so here are 10 horrific shark attack videos caught on tape.

We’re not exactly sure why it’s so fun to watch swimmer’s limbs being torn asunder, but probably for the same reason, some people consider it fun to watch horror movies or visit haunted houses. For the thrill of it. To see how much they can really take. And somehow if a YouTube video of a shark attack boasts graphic content, some people are even more likely to watch it. Try me, they think.

Such will be with the videos on our list. To find them, we searched “real shark attack” on YouTube and chose some of the first few, while doing our best to weed out the fake ones for you. And there were a lot of fake ones to weed out. Because you know how desperate You Tubers can be. For instance, this video is literally entitled “Toddler Swallowed Alive But Survives in Miracle Escape,” with a picture of a clearly photo-shopped Great White closing in on the head of a perfectly smiling copy-pasted toddler’s head. Yeah, we’re totally buying that. 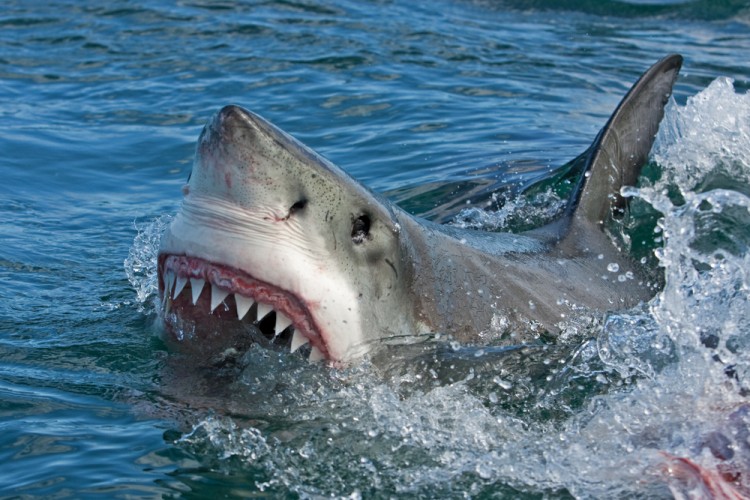 So there’s footage like that, and there’s also staged shows of shark attacks made specifically for outlets like Discovery Channel. After all, a shark attack isn’t that hard to stage. Video someone out swimming, then have them flail their arms around a lot. Throw a little red into the water in the edit later along with some scary music, and you’re set. Easy.

But there are some incredible real shark attacks found on YouTube, and you can almost just as easily distinguish a real shark attack video from a fake one. Videos that are clearly Go Pro or smartphone footage that just happen to catch the shark in the act. Videos that don’t even pose the question “real or fake?” These are the ones we selected for the list, and we put them in order of a number of YouTube views. Along with each video, we also let you know at which point in the video the shark attack action actually takes place. Just to save you time. We also tried to stray away from videos with offensive language for you. Although I wouldn’t show these videos to any nightmare-prone children.

You’ll find great white shark attack videos, along with bull and tiger shark attacks. We’ve got swimmers, divers and surfers covered too. But keep in mind the sneakiness of some You Tubers, as we said. The thumbnail on the first video we mention, for example, is of a young girl trying to escape her own shark attack, but when you actually play the video, you realize that girl (or that picture) isn’t even in it at all. (Though the video does appear to be legitimate. Legitimately about someone else.)

But even though these videos are real, because of it, some of them aren’t exactly the best shots. Because it’s hardly the surfer’s priority to get a good video of the shark when he comes into view. All they want to do is get away from him, so if you’re hoping to see high-quality close-ups of teeth sinking into flesh, you’ll be disappointed, because that rarely ever happens (except of course in the fake videos). But remember that even though we did our best only to show you the real deal, even we could be wrong.

And if you’re interested in other animal-related lists, check out the 16 Biggest Animals in the World Found Alive.

Here are 10 of the worst shark attacks ever caught on tape. Hope you aren’t taking any beach vacations anytime soon.