Greetings future all-star guitarists, are you ready to learn 10 easiest four chord songs for beginners? Learning these songs will not be difficult, and you won’t find yourself in the temptation to leave your guitar in a corner.

I will share a personal experience with you about my guitar playing beginnings. As soon as I purchased my first guitar, I wanted to tackle some of my favorite songs like “Paranoid,” “Tears in Heaven” and other rock classics, but I hardly knew how to hold a guitar. After few months of sloppy attempts, I have given up and moved on; convinced it was not meant to be. Then, almost a half year later when I was on a winter break, I didn’t have anything better to do and I decided to try it again. This time, however, I decided to go small. I’ve practiced the opening riff of “Smoke on the Water,” and then learned parts of “Come as You Are.” That minor success encouraged me to move forward learning the basic chords.  I didn’t even like the first song I learned to play in full, but I was proud of myself and it turned out to be a great stepping stone. 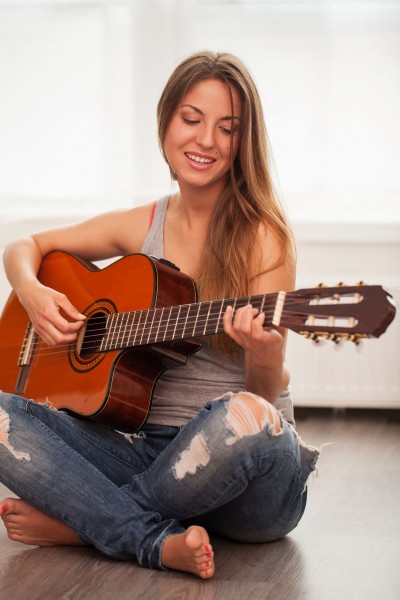 My point is that you have to be realistic with your abilities and take it slow when it comes to playing guitar. Lots of beginners aren’t patient enough, and when they fail to make significant progress, they give up. To master the art of playing guitar, you have to practice a lot. That includes practicing song you are not crazy about. Even if you don’t like country music, go through our list of 11 Super Easy Country Guitar Songs for Beginners. You may find a song that fits you, and that you can easily learn. Every song you learn how to play will take you to more complex ones and raise your confidence.

To find the 10 easiest four chord songs for beginners, we searched through “up to 4 chords guitar songs” database on Guitar Player Box. Each of the 362 listed songs has a difficulty level ranging from the basic one to expert. So, we picked 10 that had 4 chords, were “first chord” level and didn’t require a capo. Also, we made sure that there is something for everyone and that the songs use basic chords like Am, C, D, E, Em, and G. So, let’s start with the list.

Forget about the Gun’s & Roses cover; you should start with the original. We featured this song multiple times on similar lists, and it isn’t without a reason. Knockin’ On Heaven’s Door is a slow paced song, great to sing along, and overall fun to play.

Colt Ford is famous for mixing country with hip-hop, so if you are into that, there is no better place to start than “Drivin’ Around.” It has the same chords like Dylan’s classic, but they are even more streamlined. You will play G and D on one verse and Am and C on another through the entire song.

The purist in me resisted putting this one on the list, but I had to stay objective. Journey’s “Don’t Stop Believin'” was covered by the cast of Glee, and made easier to play. The original uses more advanced chords, so this version will be just fine until you pick up some pace.

If you want to try out an easy song for your electric guitar, this may be a good choice. There are a lot of chord changes, so the song will benefit you in the long run. It also features an easy solo that follows the same chords as the rest of the song.

We don’t want to neglect electric guitar, so here is another well know song that is easy to play and needs electricity. Zombie, the next on our the list of easiest four chord songs for beginners, is balanced enough for the beginners, but will also introduce you to different styles of playing.

One of Razorlight’s best songs turned out to be one of the simplest to master. Although it is meant to be played on an electric guitar, it sounds good on an acoustic guitar as well. The Em, A, D, G chords are played through the entire song in that same order.

4. We Are Never Ever Getting Back Together – Taylor Swift

Did you really think our list of 10 easiest four chord songs for beginners will end without Taylor Swift? The rhythm and chord disposition is almost identical from the start to the end. However, if you recently ended a relationship, maybe skip this one.

3. Die In Your Arms – Justin Bieber

This one on the list of easiest four chord songs for beginners, is for the female guitar beginners. Jokes aside, this song will not trouble you at all. If you already know the chords, you will need few listens to get the strumming right and you are half done learning to play “Die In Your Arms.”

Linkin Park is known to use lots of electronic beats and hard riffs in their songs, but this one is an exception. A slow ballad that is played on an acoustic guitar, “The Messenger” has a nice paced strumming that is easy for the ears as well as fingers.

You may think 2 songs from The Cranberries on our list of 10 easiest four chord songs for beginners is too much, but “Linger” is even more fitting.  The great thing about this song is that you don’t have to change chords often. There is usually one chord per one verse.  Someone who doesn’t have trained fingers will not be troubled as with some of the other songs on the list. There you have it, the perfect playlist for the beginners. Now, get that guitar out and wake up your neighbors.