It’s time to get hopped up and explore the 10 biggest hop producing countries in the world. It’s important that you have the information the next time you sit down for a beer. Be the life of the party with fun hops facts.

I love beer. I was at the beer store last night in fact.  Purchasing a few new varieties and weighing the cost effectiveness and efficiency of a growler.  I’ve tried them before and always ended up with flat beverages–still hope, like beer from a tap, springs eternal.

To explain it in the simplest way, hops are actually flowers of the hop plant Humulus lupulus. The primary use of hops is for flavoring and as a stability agent in beer. But, despite having a major role in arriving at the best beer taste, hops also do other things. Life outside of beer? However do they manage? Hops have a major impact in herbal medicine and they are also used in other beverages that you cannot wear in a beer can helmet. The hop plant is trained to grow in strings in a field called “a hop garden,” “hopfield” or “hop yard,” which sounds like a club I couldn’t get into.

Hops have a lot of benefits, but they also have side effects. If you came here to see which are the biggest hop producing countries in the world, you will also learn a thing or two about its benefits. And apparently, my endless dilemma with the growler. But seriously, is it ever worth it? Maybe if you planned to drink 32 oz of beer in one sitting it would make sense. I’m just not made for that.

Pretty obvious but hops is not recommended for pregnant women and children, if you exceed its dosage, it can cause upset stomach, diarrhea and vomiting. On the bright side, which is not the vomit side, hops has a lot of positive benefits on your health. It can help you relax and sleep better, it has anti-cancer as well as anti-infection benefits, anti-acne, anti-weight loss and benefits for chronic liver disease. 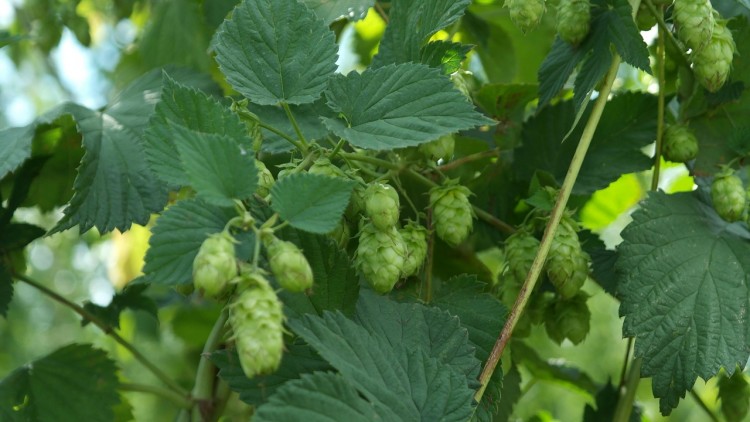 For those who were wondering if hops are gluten free, the answer is yes. Gluten is protein which can be found in wheat, barley, rye and oats. Now that you know that the hops don’t contain gluten, you should also know that a lot of beers are gluten-free, but there are also a few which contain a low level of gluten, below 20 PPM.

If you want to learn even more about hops and understand our list of the 10 biggest hop producing countries in the world, you should know that there are a few types of hops. Hops can be divided into three categories: aroma hops, bitter hops, and dual-purpose hops. The alpha acid percentage in aroma hops is very low, which makes it good for finishing or conditioning hop. Bitter hops, on the other hand have a higher alpha acid percentage and because of it, they are used for the boiling process to extract bitterness. When we talk about the dual-purpose hops, you should keep in mind that it contains both aroma and bitter hop qualities which makes it both aromatic and bittering.

Every beer fan must have been wondering what are hops in beer, until now. Or maybe you have just beer incuriously enjoying your brews–either way you know we’re gonna tell you. Hops are used for bittering the beer in the early brewing process before adding the aroma at the end. Despite giving bitterness, hops are also preservative and they extend the life of beer. Today, hops have a major role in the taste and flavor of the beer.

Even though there are beers for people who don’t like hops, there are also great hops beer brands. If you enjoy drinking beer–which means you are a human being–then you will enjoy learning about the 10 Largest Beer Brewing Companies in the world. We will leave the attempts to marry them to you.

In order to create the list of 10 biggest hop producing countries in the world, we researched 1994 – 2014. We collected data and statistics for 20 years from Food and Agriculture Organization of the United Nations (write “hops” under “Item”), which shows how many hops each continent, as well as country, produced, yield and what products are produced from 1994 to 2014. After we collected the data and statistics, and finished the list, we sorted it by the tons each country produced, starting from the least to the most.