Over the past five years, electronics retailer Best Buy Co., Inc. (NYSE:BBY) has unwillingly become the poster boy of dying big box retailers. Increased competition from e-commerce companies, such as Amazon.com, Inc. (NASDAQ:AMZN) and eBay, has dampened the company’s chances of recovery. Yet the company recently posted fourth quarter earnings that represented strong growth from the prior year quarter, topping analyst expectations on both the top and bottom lines. Is it time to take a second look at the company, to see if Best Buy is a better buy today than it was yesterday?

For its fourth quarter, Best Buy posted a loss of $1.21 per share, or $409 million – a vast improvement over the loss of $5.17 per share, or $1.82 billion, it posted in the prior year quarter. Excluding one-time charges and adjustments, Best Buy earned $1.64 per share, topping the analyst estimate of $1.53 on the same basis.

However, international same-store sales, which includes stores in Europe, Canada and China, plunged 6.6%. Best Buy surprisingly posted positive growth in crisis-stricken Europe, but those gains were offset by declines in Canada and China. Best Buy attributed its weakness in Canada to softness in its retail electronics industry, while Chinese stores suffered from increased competition and expired government stimulus programs.

Best Buy and its big box retailer peers have suffered immensely at the hands of Amazon and eBay. Customers now tend to use big box stores such as Best Buy and Target as “showrooms” for purchases from online sources, which usually offer better deals. Smartphone apps, such as Barcode Scanners, have exacerbated the problem as shoppers are able to instantly check if they can get a better deal online.

This has forced Best Buy to match Amazon’s prices dollar for dollar. In retaliation, Amazon now offers “Super Saver Shipping” for purchases over $25, which takes shipping costs out of the equation. Analysts had been worried that this aggressive strategy would crimp margins, but it only reduced gross margins slightly from the prior year – from 23.1% down to 22.6%.

Sales, General & Administrative Costs have been a sore spot for the company, as seen in the chart below. 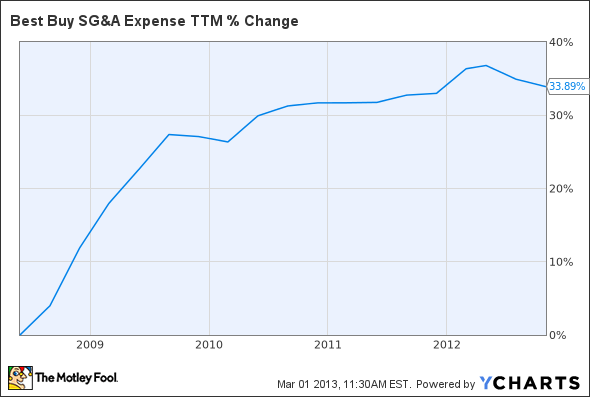 However, if Joly is truly focused on selling off or renting non-performing real estate properties, he is likely to also reduce the size of Best Buy’s massive stores to boost profit per square foot.

These smaller properties, along with possible reductions in the workforce, could reduce SG&A costs considerably. Joly has already laid off 400 workers at Best Buy’s headquarters in Richfield, Minn. He also closed 15 non-performing stores in Canada.

Joly urged patience, stating, “We recognize, however, that fiscal 2014 is a year of transition and that further investment will be required to advance our Renew Blue transformation.”

While Radio Shack is obviously the stock of choice for bottom-fishing value investors, the stock’s 58% plunge over the past twelve months and its negative profit margins make it an unacceptably risky choice. Conn’s, on the other hand, has the strongest margins as well as the most robust performance over the past year, and as a result it is trading at a premium to its peers. Best Buy’s strengths are its comparatively lower debt levels and reasonably cheap forward valuation.