Is Zoetis Inc (ZTS) A Good Stock To Buy According To Hedge Funds?

The market has been volatile as the Federal Reserve continues its rate hikes to normalize the interest rates. Small-cap stocks have been hit hard as a result, as the Russell 2000 ETF (IWM) has underperformed the larger S&P 500 ETF (SPY) by about 4 percentage points through November 16th. SEC filings and hedge fund investor letters indicate that the smart money seems to be paring back their overall long exposure since summer months, and the funds’ movements is one of the reasons why the major indexes have retraced. In this article, we analyze what the smart money thinks of Zoetis Inc (NYSE:ZTS) and find out how it is affected by hedge funds’ moves.

Zoetis Inc (NYSE:ZTS) was in 41 hedge funds’ portfolios at the end of the third quarter of 2018. ZTS investors should pay attention to an increase in support from the world’s most elite money managers of late. There were 39 hedge funds in our database with ZTS holdings at the end of the previous quarter. Our calculations also showed that ZTS isn’t among the 30 most popular stocks among hedge funds.

Heading into the fourth quarter of 2018, a total of 41 of the hedge funds tracked by Insider Monkey were bullish on this stock, a change of 5% from the second quarter of 2018. Below, you can check out the change in hedge fund sentiment towards ZTS over the last 13 quarters. With hedgies’ capital changing hands, there exists an “upper tier” of key hedge fund managers who were upping their stakes significantly (or already accumulated large positions). 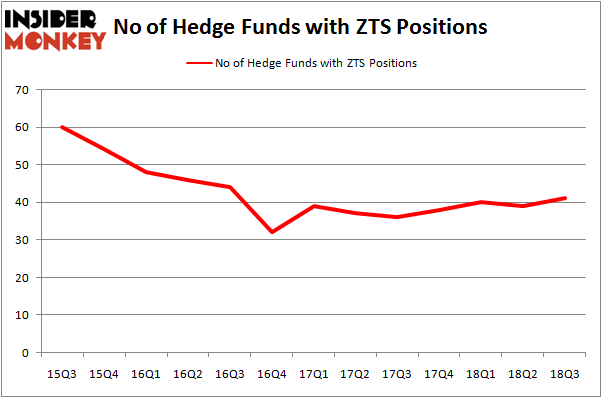 With a general bullishness amongst the heavyweights, specific money managers were breaking ground themselves. Impax Asset Management, managed by Ian Simm, created the most outsized position in Zoetis Inc (NYSE:ZTS). Impax Asset Management had $7.6 million invested in the company at the end of the quarter. Israel Englander’s Millennium Management also made a $4.6 million investment in the stock during the quarter. The following funds were also among the new ZTS investors: Barry Rosenstein’s JANA Partners, Peter Algert and Kevin Coldiron’s Algert Coldiron Investors, and Ira Unschuld’s Brant Point Investment Management.

As you can see these stocks had an average of 32.25 hedge funds with bullish positions and the average amount invested in these stocks was $1490 million. That figure was $2241 million in ZTS’s case. The Sherwin-Williams Company (NYSE:SHW) is the most popular stock in this table. On the other hand, Prologis Inc (NYSE:PLD) is the least popular one with only 25 bullish hedge fund positions. Compared to these stocks Zoetis Inc (NYSE:ZTS) is more popular among hedge funds. Considering that hedge funds are fond of this stock in relation to its market cap peers, it may be a good idea to analyze it in detail and potentially include it in your portfolio.