Asia is clearly the big growth story these days, and for good reason. However, with every growth story there are, invariably, excesses that take place. One that’s “brewing” in the region today is beer and spirits. With the prices being paid in recent transactions, it looks like some companies will require impressive growth from the region to make their deals work out.

The big story in Asia is China. Clearly that country is going through an industrialization that has moved it well beyond its largely agrarian past. The transition has been difficult at times, and will likely continue to be so for the near future, but, overall, citizens are increasingly entering the so-called middle class.

That’s an important milestone financially, because it means that an increasing number of citizens have disposable income. Having lived through the West’s industrial revolution, what those new middle class folks will do with their money is pretty clear—they will spend it. How, exactly, they choose to spend will be different in many ways, but it will rhyme well enough for companies to take advantage of the growth potential.

Of course China isn’t the only nation in Asia, and others are either following along on China’s coattails or are ahead, often well ahead, of the giant country in their efforts to become developed nations. However, until recently, many investors and plenty of companies simply didn’t dare tread in Asian waters. China’s advance has materially altered that dynamic.

One important habit change as people inch up the socioeconomic scale is to eat better. This includes such things as eating out more often, which companies like Yum! Brands, Inc. (NYSE:YUM) and McDonald’s Corporation (NYSE:MCD) hope to take advantage of, but it also includes eating better. Rice and beans can provide carbohydrates and protein, but rice and beef (chicken, pork, etc.) tastes better to a lot of people.

Drinking habits are similar, with beverage companies like PepsiCo, Inc. (NYSE:PEP) and The Coca-Cola Company (NYSE:KO) aggressively expanding to take advantage of the trend. Simply put, the more you make the more prepackaged drinks you tend to consume in a year. Beer and spirits is another industry that will see increased sales. Though these beverages always seem to have strong underlying demand, consumers often trade up to higher prices fare when they have more money to spare.

In fact, with the purchase prices being paid for some Asian alcohol companies, this area is looking particularly bubble like.

Bloomberg recently ran an article highlighting that merger and acquisition, and joint venture activity in Asia is heating up. Deepa D’Souza, a consultant with Indian firm Mintel, summed up the problem when she told Bloomberg, “…There are not enough suitable assets available and so there is a race to pick up whatever is around…” That sounds like a recipe for disaster for the purchasing companies that get caught up in a feeding frenzy.

For example, Heineken recently paid what appears to be among the richest valuations ever for an Asian brewer when it agreed to buy a controlling stake in Asia Pacific Breweries. The nearly $6.5 billion deal is about 35 times earnings. While the industry is likely to see growth, beer typically isn’t a high margin business in the region, making 35 times earnings a pretty risky multiple. 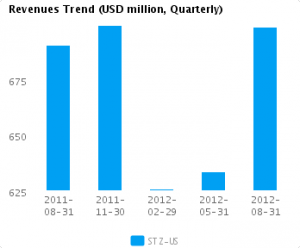 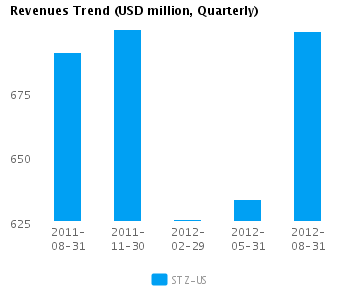 Why is Craft Brew Alliance Inc (BREW) Jumping Around?

Coors, Anheuser-Busch Among The 5 Alcohol Stocks Hedge Funds are Getting Drunk...

Are Costco’s Growth Days Over?