As the European crisis unfolds, businesses and consumers are forced to cut back spending on all non-essential services. Having enough money to cover the basics is enough of a challenge. From phone service to mail delivery to electricity, there are certain regular expenditures that simply can’t be avoided.

Yet European stocks of all stripes have taken it on the chin during the past few years anyway, regardless of what type of economic exposure they have. And that has created some eye-popping dividend yields.

In fact, there’s one sector in Europe that routinely sports double-digit yields these days: Telecom. Leading phone service providers, which tend to generate stable operating profits in any economic climate, haven’t been able to avoid the European-wide sell-off. Check out the super-high yields you will find for these telecom stocks:

Make no mistake, consumers in these countries are feeling pinched these days, but phone bills are up there with death and taxes in terms of unavoidable certainties. Still, as all of these firms face the same industry dynamics, it’s wisest to focus on just one two of these stocks for your portfolio, perhaps in the relatively stronger European economies of Germany, Austria or the Netherlands.

Other High-Yielders
Not a fan of telecom stocks? Well, I’ve dug deeper to find a handful of other European industry dominators, all of which sport dividend yields of at least 6%. Take U.K. drug maker AstraZeneca plc (NYSE:AZN) as an example. A broad portfolio of existing drugs coupled with robust research efforts enable this pharma stock to hike its dividend year-in and year-out. In 2003, that meant a dividend of 73 cents a share. By 2011, that figure had risen almost four fold to $2.80. That’s an 18% compound growth rate. Look for this drug maker’s dividend payments to exceed $3 a share in 2013, which means the yieldshould stay nicely above 6%. 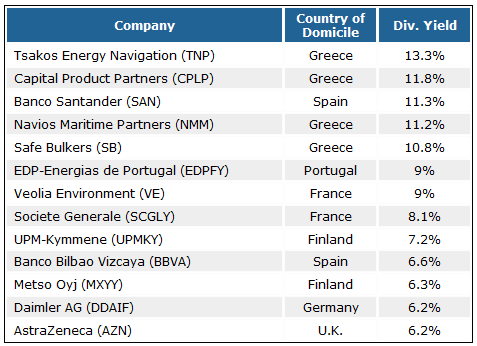 In the world of high-yield investing, there is no free lunch, so as you climb the yield ladder, you’re taking on added risk. As a result, the double-digit yielders noted in the table above might carry more risk than you should be willing to accept. High yields often implicitly suggest that dividends may eventually need to be pared back our eliminated outright.

That’s why it’s wiser to focus on the companies with yields in the mid to high single-digits. German automaker Daimler is a great example. Ever since European car and truck sales began slumping in early 2011, Daimler (which owns the coveted Mercedes-Benz brand) has been out of favor.Shares have fallen from the low $70s in early 2011 to a recent $46, which has pushed thedividend yield up to impressive levels.

This doesn’t mean Daimler won’t take steps to preserve cash if business slows. After all, this dividend was cut from $2.56 a share in 2007 to just 77 cents a share in 2008. But as it has been the case during every economic slowdown in the past, this company’s dividend always comes back stronger. In 2011, Daimler again increased its dividend to $2.81. Frankly, this dividend looks fairly solid right now, even in the face of tremendous economic challenges. Analysts expect Daimler’s profits to rise roughly 5% in 2013 to roughly $6 a share and expect the dividend to remain at current levels.

Risks to Consider: If Europe slips from its current mild recession into a much deeper one, then dividend cuts may become unavoidable. Yet over the long haul, these dividends would likely be restored as economies stabilize and rebound.

Action to Take –> One of the best ways to find high-yielding investments is to seek out-of-favor companies, industries and economies. Europe is surely out of favor right now. The key is to read the company’s financials to be sure that the balance sheet and cash flow statementcan support continued dividends at current levels. You can also follow High-Yield International, where StreetAuthority’s Co-Founder Paul Tracy shows the best of the world’s highest-yielding opportunities in foreign markets.

Is Bristol Myers Squibb a Good Stock to Buy?