Yandex NV (NASDAQ:YNDX) has struggled since the May 2011 IPO, and its share price has never seen the highs it achieved in the first week of trading. But that might change soon, since the company is showing strong growth and expects the growth to continue. The company reported earnings that beat analyst estimates, and the management raised the full-year revenue guidance. The market responded with a surge in share price, and Yandex NV (NASDAQ:YNDX) went on to reach new 52-week highs. 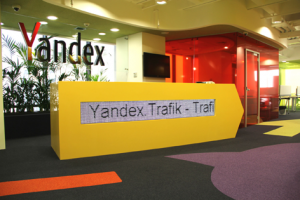 Yandex NV (NASDAQ:YNDX) reported first-quarter earnings of $0.23, beating analyst estimates of $0.19 and up 64% over the same quarter last year. Revenue rose 36% to $252.9 million, ahead of analyst estimates of $247.8 million. The company expects the robust growth to continue, and the management raised full year revenue growth guidance to 30%-35% range from previous range of 28%-32%.

Yandex NV (NASDAQ:YNDX) had a 61.6% share of the Russia’s search market, a 2.2% increase over last year’s 59.4% market share, and 1.1% sequential increase from 60.5% market share in the fourth quarter. Share gains were driven by improvements in search technology, growth in the regions, increasing share on Chrome and Android, and increasing adoption of the Yandex NV (NASDAQ:YNDX) browser.

Yandex.Market, the company’s retail site, continues to grow faster than the overall revenue. In March, the company launched a ramped Yandex.Market application for Android, which is designed both for smartphones and tablets, and has been well-received, with over 1 million updates and 100,000 new installations since launch. The Yandex.Market remains one of the company’s top priorities this year, as it continues its aggressive push in the mobile market.

Yandex NV (NASDAQ:YNDX) announced that it is forming a joint venture called Yandex.Money with Sberbank. Under the terms of the joint venture, Yandex will receive $60 million for a 75% share in Yandex.Money. Yandex.Money is an easy and safe option to pay for services and goods on the Internet.