Yahoo! Inc. (YHOO): The New CEO May Be Making Her Move

Yahoo! Inc. (NASDAQ: YHOO) is rumored to be buying a controlling stake in foreign video streaming giant Dailymotion. It would mark the first big move by new CEO Marissa Mayer and pit the web giant against her former employer, but is it enough?

Yahoo! Inc. (NASDAQ: YHOO) started life as a way to navigate the world wide web. It was a portal through which individuals could find useful information across a varied and idiosyncratic new communication technology. In the early days of the Internet, Yahoo! was a service that almost everyone used.

As a free tool, the company was one of the first to pioneer the advertising model. Google Inc. (NASDAQ: GOOG), however, quickly changed the way people used the Internet with its impressively powerful search tool. It wasn’t long before you Googled for information instead of searching for it.

While Google’s business has been on a steady uphill climb, Yahoo has been languishing. In fact, after a peak in 2008, Yahoo’s top line has been in a steady decline. Earnings have been inconsistent at best. Google, on the other hand, has seen both its top and bottom lines head higher and higher.

Indeed, there’s a good reason why Yahoo! Inc. (NASDAQ: YHOO) shares are down over 20% over the last five years or so and Google’s are up nearly 90%. 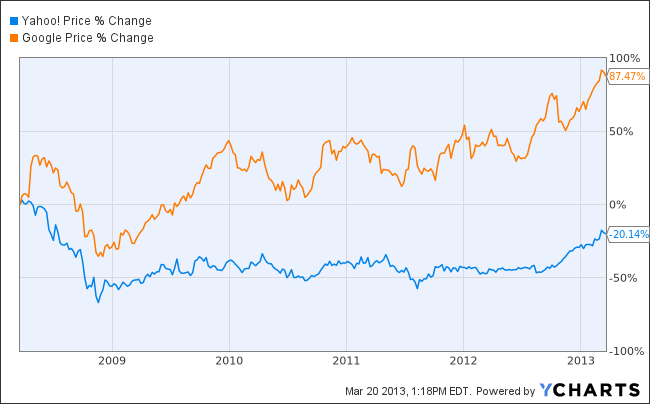 After trying numerous times to find the right leader, including a trip back to co-founder Jerry Yang, the company recently hired Mayer. Her last employer was direct competitor Google. Clearly, the goal was to bring some of Google’s magic to Yahoo! Inc. (NASDAQ: YHOO) So far, however, the new CEO’s relatively short tenure has been unexciting at best.

That was until The Wall Street Journal leaked the news that Yahoo! Inc. (NASDAQ: YHOO) was looking to buy a controlling stake in foreign video sharing site Dailymotion. The two companies recently inked a content deal, so a further tie up isn’t surprising. It would also move Yahoo! into the video space in a big way with a company that’s been trying to break into the U.S. market.

The deal makes sense for both companies. Moreover, it looks like a good use of the more than $7 billion Yahoo! received from selling half its stake in Alibaba. Taking on Google, however, hasn’t been the best path for the company in the past.

For example, Yahoo! famously linked up with Microsoft Corporation (NASDAQ: MSFT) when the software giant introduced its Bing search engine. While the goal was to take on Google’s dominance, the result has been little more than merging Yahoo! and Microsoft Corporation (NASDAQ: MSFT)’s previous search market shares. Clearly, that hasn’t worked out as well as planned. Google Inc. (NASDAQ: GOOG) just has too large a lead.

That’s a fact that is likely true in the video space, as well. Google’s YouTube video sharing site has a massive head start and huge market position in the United States. Yahoo! Inc. (NASDAQ: YHOO) will have to do some pretty heavy lifting to unseat the company.

If an ad campaign by Microsoft touting the look and performance of Bing hasn’t done much to change the search picture, what exactly is Yahoo! going to do on the video side? And Microsoft Corporation (NASDAQ: MSFT) has a far stronger business than Yahoo!, so it can better afford such fights.

In this, J.C. Penney Company, Inc. (NYSE: JCP) should be a cautionary tale. The retailer brought in a former Apple exec as CEO to much fanfare. The idea was that Ron Johnson would bring along with him some of the Apple store magic. Exactly the opposite has occurred, with major miscues resulting in plummeting sales and earnings. And a moribund share price.

Investors clearly haven’t benefited from Johnson’s Apple experience. At this point, all but the most aggressive investors should avoid the company until results show a consistent turn for the better.

The lesson is that just because a person achieved success at one company doesn’t mean he or she will repeat that achievement at a new company. While it is a time honored practice to run interference by entering a competitor’s markets, Yahoo! needs to grow again, not block and tackle Google. Buying a video business could be a step in the right direction or an expensive folly that does little for the underlying problem.

In the end, Mayer’s first big move shouldn’t be taken as a sign for investors to jump aboard. Yahoo! Inc. (NASDAQ: YHOO) has a lot more to prove before it’s safe to flash the all clear.

Google Inc (GOOG): America’s 8th Best CEO Will Give You an Investing...

Herbalife Ltd. (HLF), Yahoo! Inc. (YHOO): These Stocks Are Being Ruled by Hedge...