Google Inc (GOOG): America’s 8th Best CEO Will Give You an Investing Edge

Over the past few days, I’ve covered CEOs 25 through 9. Today, I’m going to introduce you to the company with the 8th-highest-rated CEO, give you some background on the company, and at the end, I’ll offer up access to a special premium report that covers the biggest name in tech.

Google Inc (NASDAQ:GOOG)
You might be wondering how a company as big as Google Inc (NASDAQ:GOOG) — there are over 50,000 employees at the Big G — could have a CEO that so many admire and approve of (95%, to be exact). That’d be a fair question, but accomplishing something like this speaks volumes about what CEO Larry Page.

This is actually Page’s second stint as CEO, with the first occurring from 1998 to 2001. Page co-founded Google Inc (NASDAQ:GOOG) along with Sergey Brin, and the two have been helping run day-to-day operations throughout the life of the company.

From 2001 until 2011, the duo brought on Eric Schmidt as CEO, as he brought the type of corporate experience in technology necessary to help the company grow. Having learned from Schmidt’s leadership, Page took over again two years ago, and the company has continued its impressive streak of innovation.

From a strictly numbers standpoint, what Google Inc (NASDAQ:GOOG) has accomplished as a public company is mind-boggling: 44% revenue growth and 51% earnings growth per year! 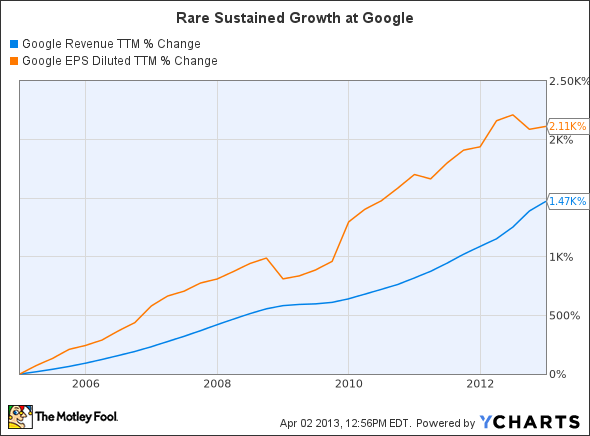 Against heavy competition, innovation rules
What’s even more impressive about Google Inc (NASDAQ:GOOG)’s story is that it wasn’t the first-mover in the Internet search business. Yahoo! Inc. (NASDAQ:YHOO) got there first.

But before Google arrived on the scene, Yahoo! was simply producing search results based on its web directory. That meant that results were both incomplete and somewhat randomized. Google flipped this on its head by creating an iterative algorithm that could produce more complete and accurate results. Since then, the company has grown to capture 83% of the global search market, with Yahoo! coming in second, at 8%.

More recently, the company has taken on other big names — most notably Apple Inc. (NASDAQ:AAPL) and its iOS operating system for mobile devices. In an attempt to make Google the default search option of your smartphone, the company produced the Android operating platform as a free, open-source system.

In the United States alone, Android has opened up an eight-percentage point lead over Apple’s iOS among mobile devices (51% to 43%). Globally, the number is even bigger, with Android capturing about 70% of smartphone operating systems in 2012. Part of the reason is that Apple’s iPhone has a price tag that makes it prohibitive for people in many countries.