Williams-Sonoma, Inc. (WSM), Bed Bath & Beyond Inc. (BBBY): What a Return of the High-End Shopper Means for Home Goods

Williams-Sonoma, Inc. (NYSE:WSM) is by all accounts one of the premiere home-goods stores. After bottoming out at around $6 in 2008, Williams has been on a tear. Returning to over $55 in under five years, the stock is up over 800%. 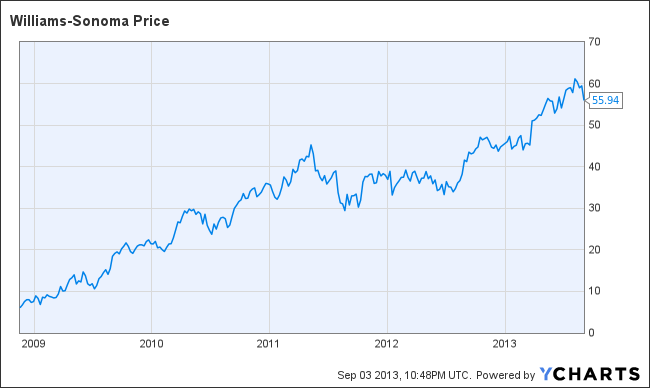 But, what’s more is that Williams-Sonoma, Inc. (NYSE:WSM) could have further upside. I believe that if the economy continues to strengthen, then shoppers will begin sprucing up their homes with new items. Williams sells high-end cooking and entertaining essentials, while it also runs the Pottery Barn and West Elm brands, which focus on casual-home furnishing.

Things are a-changing
In the past, Williams-Sonoma, Inc. (NYSE:WSM) has been considered a higher end, more expensive brand; as one Yelp review puts it: “Bed Bath & Beyond Inc. (NASDAQ:BBBY) is normally where I shop for my kitchenware, but I stumbled upon Williams-Sonoma and decided to check out if there was anything I didn’t need. Sad thing is there were tons of cooking items there I did need, but they are so freaking expensive I couldn’t convince myself to part with my credit card for a $200 pan.”

But with its promotional activities and rebounding economy, the company should fare well. Hence, another “Yelper” notes that, “Even though Williams-Sonoma, Inc. (NYSE:WSM) is pretty high end, some of the deals you find in this store are comparable to what you might find at Costco Wholesale Corporation (NASDAQ:COST). A couple of weeks ago, they had a great selection of slow juicers that are normally $500+ for the $300 range.”

As a result, I see Williams-Sonoma, Inc. (NYSE:WSM) being one of the biggest benefactors of a rebounding housing market. The company should manage to see improved growth as shoppers begin to see Williams as a home-goods store for all, and not just the high-end.

Industry tailwinds
A strong housing market is a big positive for home-goods stores. But it’s not all about the housing rebound, as the move-up market is also strong. More individuals are considering renting as a long-term viable option. Generation Y (those born from the early 80’s to early 00’s) is leading this trend. The U.S. Census Bureau believes the population of 24-to-34 year old’s will hit 3 million by 2015.

And as the economy rebounds, although these Gen-Y’ers might not be looking to purchase a home right away, I do believe they will be looking to “move up,” which includes moving into larger or nicer apartments or homes.

If we assume no multiples expansion and place a 20 times P/E on Williams-Sonoma, Inc. (NYSE:WSM)’ 2015 expected EPS, the target price is almost $64. That’s an over 10% annualized return, not to mention the 1.8% dividend yield investors will be getting.

The Amazon of home goods
Bed Bath & Beyond Inc. (NASDAQ:BBBY) is one of the other major home-goods stores. The stock is up over 130% during the past five years, which comes as the company continues its rapid store expansion. Bed Bath hopes to open some 45 stores in 2013, with plans to open two stores in Mexico.

But the real draw for shoppers is that Bed Bath & Beyond Inc. (NASDAQ:BBBY) is considered a one-stop shop when it comes to dorm-room shopping. And what’s more is that BB&T Corporation (NYSE:BBT) Capital Markets has found that Bed Bath & Beyond’s prices are over 6% cheaper compared to Amazon.com, Inc. (NASDAQ:AMZN) (30 products were analyzed). Not to mention the fact that Amazon doesn’t charge a sales tax, for now, in most states. Even still, Amazon still offers the convenience of not having to leave your home. So I think Amazon will continue to be a go-to for some of Bed Bath’s key items.

Furniture too!
Pier 1 Imports, Inc. (NYSE:PIR) is one of the great stories in the home-goods sector, coming incredibly close to bankruptcy in 2009, and trading as low as $0.20. The stock has come roaring back, and is now trading above $20. And the company continues to see solid performance, posting last quarter EPS of $0.19 compared to $0.16 for the same period last year. This comes on the back of a 9.3% increase in year-over-year sales and 5.9% higher same-store sales.