Is William Lyon Homes (NYSE:WLH) the right pick for your portfolio? Prominent investors are reducing their bets on the stock. The number of bullish hedge fund positions fell by 5 lately. Our calculations also showed that WLH isn’t among the 30 most popular stocks among hedge funds.

How have hedgies been trading William Lyon Homes (NYSE:WLH)? 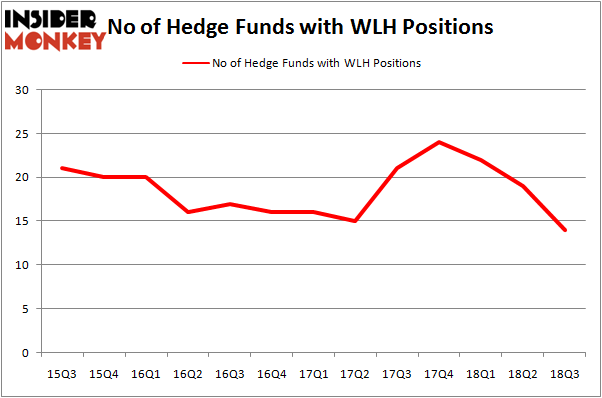 According to Insider Monkey’s hedge fund database, GMT Capital, managed by Thomas E. Claugus, holds the biggest position in William Lyon Homes (NYSE:WLH). GMT Capital has a $55.4 million position in the stock, comprising 1.4% of its 13F portfolio. On GMT Capital’s heels is Israel Englander of Millennium Management, with a $24.3 million position; less than 0.1%% of its 13F portfolio is allocated to the stock. Other members of the smart money that hold long positions comprise John Khoury’s Long Pond Capital, Tom Brown’s Second Curve Capital and Joe Huber’s Huber Capital Management.

Due to the fact that William Lyon Homes (NYSE:WLH) has experienced bearish sentiment from the entirety of the hedge funds we track, we can see that there is a sect of funds who sold off their full holdings by the end of the third quarter. Intriguingly, Michael Barnes and Arif Inayatullah’s Tricadia Capital Management sold off the largest stake of the “upper crust” of funds tracked by Insider Monkey, totaling close to $14.8 million in stock. Peter Algert and Kevin Coldiron’s fund, Algert Coldiron Investors, also sold off its stock, about $2.7 million worth. These transactions are important to note, as aggregate hedge fund interest dropped by 5 funds by the end of the third quarter.

As you can see these stocks had an average of 8.75 hedge funds with bullish positions and the average amount invested in these stocks was $44 million. That figure was $149 million in WLH’s case. Vericel Corp (NASDAQ:VCEL) is the most popular stock in this table. On the other hand DryShips Inc. (NASDAQ:DRYS) is the least popular one with only 2 bullish hedge fund positions. William Lyon Homes (NYSE:WLH) is not the most popular stock in this group but hedge fund interest is still above average. This is a slightly positive signal but we’d rather spend our time researching stocks that hedge funds are piling on. In this regard VCEL might be a better candidate to consider a long position.