Few companies are as globally known as The Coca Cola Company (NYSE:KO), the world’s largest beverage company. Few stocks are also as trusted as Coca-Cola, which has generated steady growth and income for conservative investors over the past decade. However, Coca-Cola’s fourth quarter results have some investors doubting the soft drink giant’s ability to continue expanding overseas. Is Coca-Cola still a fizzy investment, or has this stock gone flat?

Dr. Pepper Snapple wins in every growth metric. However, this is also because it is a much smaller company, with a market cap of $9 billion compared to Coca-Cola’s $168 billion and PepsiCo’s $112 billion. Coca-Cola comes out on top in two important categories – lower debt and higher profit margins. Both will be extremely important for balancing the company’s overseas expansion with unstable commodity prices.

Let’s also chart Coca-Cola’s top and bottom line performance against PepsiCo and Dr. Pepper Snapple over the past three years. 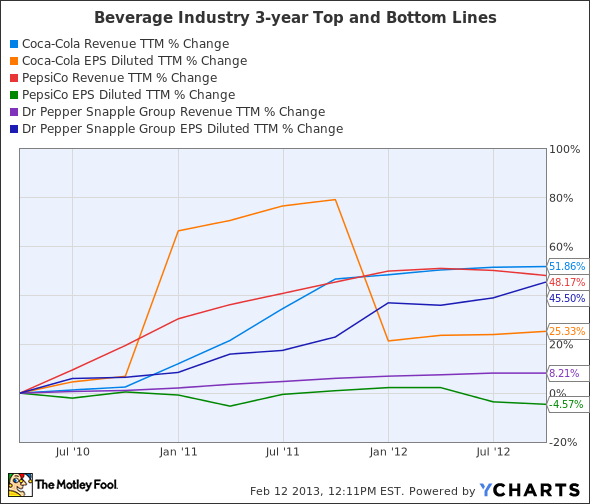 Coca-Cola’s revenue growth is notably outpacing its earnings growth. Although Coca-Cola is still growing its bottom line at a healthy rate, the divergence of PepsiCo’s top and bottom lines should serve as a cautionary tale for Coca-Cola shareholders. Meanwhile, Dr. Pepper has grown its bottom line faster than its top line – a healthy indicator that its margins are still kept in check.

Lastly, we should compare the operating margins of these three companies over the same period. 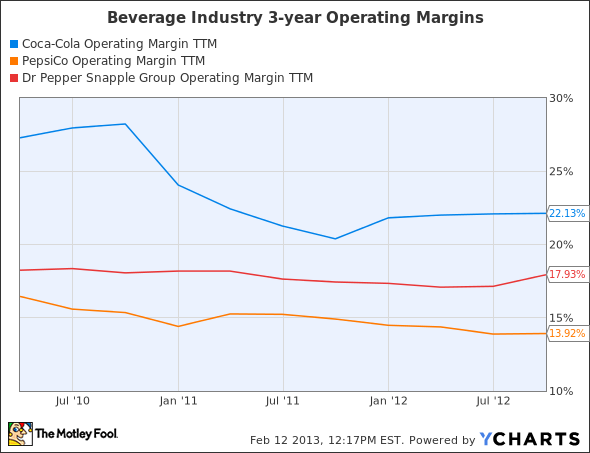 Coca-Cola’s margin growth is the healthiest, despite its wide exposure to global markets.

Based on pure fundamental growth, Coca-Cola is a rock solid stock that trades at a slight premium to its peers but also has the margin and revenue growth to back it up.

So if Coca-Cola’s fundamentals are so stable, why are investors worried? Let’s take a look at the key numbers from its fourth quarter earnings.

While earnings topped the Thomson Reuters’ forecast of 44 cents per share, revenue missed the forecast of $11.53 billion. Gross margin also dipped from 60.1% to 59.6%.