Will Potash Corp. (POT) Ever Outperform?

In August of 2010 I made a very bold CAPScall on Potash Corp./Saskatchewan (USA) (NYSE:POT). The call came right after the fertilizer giant had received a hostile takeover bid from BHP Billiton Limited (ADR) (NYSE:BHP). That original bid was for a split adjusted $43.33 a share, which I thought was too low.

In that original CAPScall I boldly proclaimed: “I think BHP offers more and gets the deal done. Probably around $180/sh (Author’s note: Split adjusted that’s $60 a share). You can even look at a pairs trade and short BHP through the deal.” In the end, the Canadian government actually blocked the deal, and I was left with a busted thesis.

Oddly enough, PotashCorp hit that price target, but instead of claiming victory, I doubled down on my outperform call. Over that time, the S&P 500 is up about 37% while PotashCorp is down 9%. Is it time to give up on my bullish bet?

On the contrary, I think that now would be the worst time bail. Much of PotashCorp’s recent struggles have been due to weakness in both China and India. Farmers in those two markets have been delaying new contracts. Chinese contract negotiations wrapped up in January, but India has yet to finalize any deals. It, too, is likely to come around as food costs are climbing rapidly in India, and fertilizer is one of the cheaper methods of boosting crop yield. Continued population growth and below-average crop yield virtually assure India’s need to increase potash usage.

Not only that, but bullish signs abound in the North American and Latin American agriculture markets. Monsanto Company (NYSE:MON) reported excellent results last quarter with growth coming especially from Latin America. That’s on top of a similar report from Mosaic Co (NYSE:MOS) which saw its 18% growth in Latin America. Monsanto also saw strength in the U.S. as the company was able to pass on price increases to farmers.

Unfortunately for PotashCorp investors, until India turns, the company’s near-term performance could continue to be muted. It’s said just as much when it announced reduced earnings for its upcoming full-year report. However, over the longer term, the outlook is much brighter.

That outlook is simple really: Increased population across the globe, when combined with less arable land, means farmers will need to use more fertilizer to feed everyone. PotashCorp is the low-cost producer, meaning that more of its future sales will fall to the bottom line. At some point we’ll hit that tipping point, and when we do, PotashCorp investors will reap the harvest.

The article Will PotashCorp Ever Outperform? originally appeared on Fool.com and is written by Matt DiLallo.

Commodities in 2013: 2 Ways to Cash in on the Increasing Food Demand 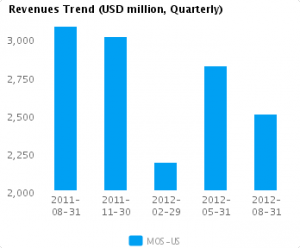 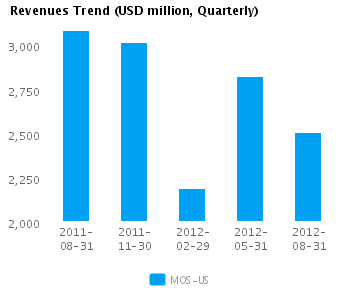