Eli Lilly & Co. (NYSE:LLY) investors just can’t catch a break lately. This Big Pharma member had high hopes for replacing lost revenue from Zyprexa, Cymbalta, and Humalog — all staring down fierce generic competition — with various late-stage pipeline candidates. Things aren’t looking so promising four major failures later. It’s far from being the only company facing the dire straits of the patent cliff, but some peers have done remarkably well in planning for futures without former blockbusters. Is Eli Lilly stock about to be devoured?

It’s not so bad here
Last summer, Eli Lilly & Co. (NYSE:LLY) announced that development of pomaglumetad methionil for schizophrenia would be stopped because of lack of efficacy. The drug was expected to complement the company’s expertise in neurological disease treatments, although peak annual sales were expected to be only about $250 million. More recently investors learned that enzastaurin for large b-cell lymphoma failed a phase 3 trial. Luckily, the cancer drug candidate was not a major part of the company’s plans, either.

While we can say that neither drug was significant, Eli Lilly & Co. (NYSE:LLY) was surely looking forward to eventual revenue from both. Atypical antipsychotic therapies such as Risperidone from Johnson & Johnson (NYSE:JNJ) and Zyprexa haven’t been improved upon much in decades. Each now has generic alternatives, which has left Big Pharma looking for proprietary treatments that are safer and more effective and have bigger impacts on the top line. Meanwhile, the lymphoma market has no shortage of competition. So investors shouldn’t worry too much about these failures.

Reality check
Failures were also announced for solanezumab in Alzheimer’s disease and tabalumab in rheumatoid arthritis. Solanezumab simply didn’t meet its primary endpoint in either of two phase 3 trials, although the drug has since been moved into trials evaluating milder cases of the disease. It would have been a great product in a best-case scenario, but Eli Lilly & Co. (NYSE:LLY) isn’t alone in its unsuccessful search for new ways to treat Alzheimer’s disease. Johnson & Johnson (NYSE:JNJ) and Pfizer Inc. (NYSE:PFE) recently discontinued a trial for bapineuzumab after limited efficacy as well. An effective treatment for the disease would be a major breakthrough but remains elusive to date.

The company was also hoping to crack into the rheumatoid arthritis market with tabalumab, which kept the streak of ineffective treatments going for shareholders. Despite losing out on this massive market initially, Eli Lilly & Co. (NYSE:LLY) does have a promising JAK inhibitor (baricitinib) being developed with Incyte Corporation (NASDAQ:INCY) for the disease and an additional trial for psoriasis. If successful, safe, and effective, the oral treatment could be more convenient for patients currently taking injectable biologics.

The bad news is that by the time baricitinib is potentially approved years from now, it will have to compete with Xeljanz from Pfizer Inc. (NYSE:PFE), which hit the market shortly after being approved in November. The good news is that Xeljanz will have to suffer the growing pains of being a first-in-class therapy in an established market and could very well pave the way for a successful launch for Eli Lilly & Co. (NYSE:LLY).

The real danger to shares
So if these highly publicized failures won’t devour Eli Lilly stock, what will? Falling revenue. While late-stage failures and revenue are connected, the most promising trials for Eli Lilly & Co. (NYSE:LLY) are still in phase 2 trials. In fact, the company has a total of 24 compounds in mid-stage development. The market seems to be looking a little further into the future and has actually sent shares to a five-year high. 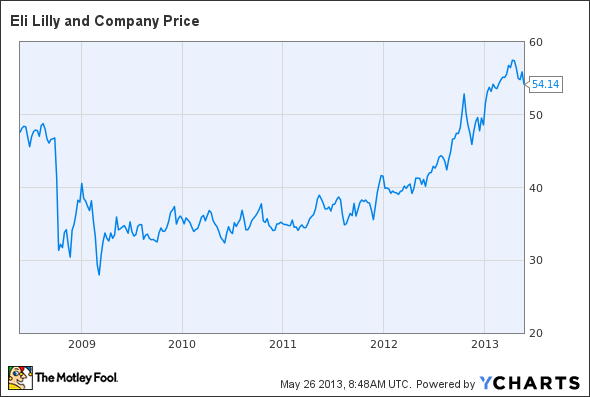 Should investors take a cue from the market before hitting the panic button?