Shares of MannKind Corporation (NASDAQ:MNKD) have nearly tripled over the last year. The value of the biotech is up a whopping 584% when you look at the company’s market cap because of all the additional shares it’s sold. 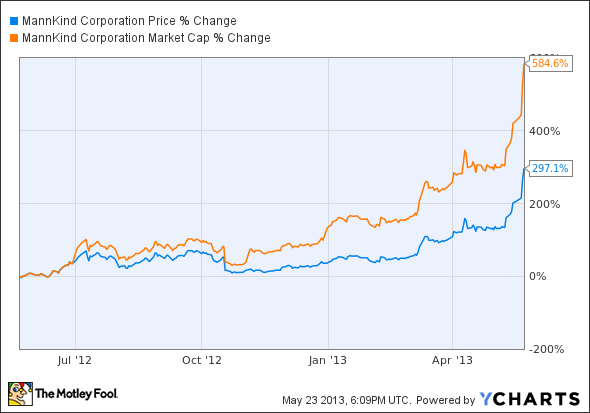 Clinical trial data? Not really. The company completed enrollment for two phase 3 trials testing its inhaled insulin Afrezza in October, but the trials aren’t expected to read out until this summer.

Big licensing deal? No, MannKind Corporation (NASDAQ:MNKD) has been talking about one for years, but nothing has materialized yet.

Instead, it looks like the price increase is simply because investors are more interested in owning MannKind than they were a year ago. More buyers and fewer sellers means the price has to go up. Valuation be damned.

Why now?
It’s the typical run-up that biotechs see before data will be released or before the Food and Drug Administration is scheduled to make a decision about a marketing application. In MannKind Corporation (NASDAQ:MNKD)’s case, it’s those phase 3 trials that are being wrapped up and should report shortly.

With no binary event in the foreseeable future — and for some traders, foreseeable can be a month, often less — few investors want to own a biotech as it’s unlikely to change in value with no news. As the binary event approaches, more people want to own the company, which drives the shares higher.

Priced in
The problem with this run up, especially for events like MannKind Corporation (NASDAQ:MNKD)’s phase 3 trials that are widely expected to be positive, is that most of the upside is already gone.

There’s risk that, even with good data, we could see the same issue for MannKind Corporation (NASDAQ:MNKD). Unless the company signs a big marketing partnership, investors are going to be rightfully worried about the launch of Afrezza after Pfizer Inc. (NYSE:PFE)‘s flop with its inhaled insulin, Exubera, a few years ago. Afrezza is arguably a much better product than Exubera, but MannKind is still going to have the same problem Pfizer Inc. (NYSE:PFE) had; invoking a paradigm shift on how doctors treat diabetics that need insulin isn’t easy and will require a lot of marketing muscle.

The article MannKind’s Run to Glory originally appeared on Fool.com and is written by Brian Orelli.