Will Microsoft Corporation (MSFT) Become the IT King Again?

Where are you heading, Microsoft Corporation (NASDAQ:MSFT)? Once the most valued company in the world (in late 1999 it reached an intraday high share price of $119.94!), Microsoft Corporation (NASDAQ:MSFT) paid the consequences of missing key technological innovations in the past ten years, from smartphones to tablets and cloud computing. As its historical main business, the Windows PC operating system, continued declining, so did the share price. 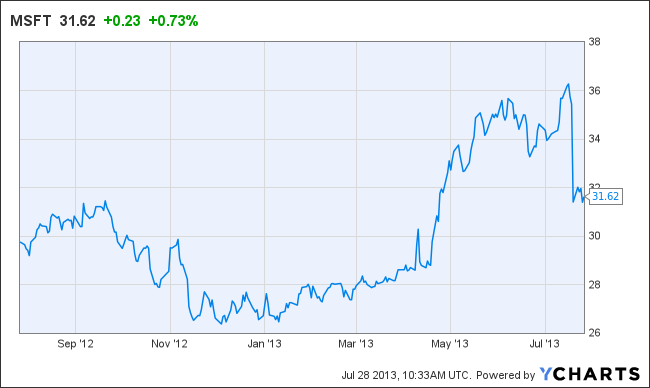 Let’s start with the facts. In the latest earnings call, Microsoft Corporation (NASDAQ:MSFT) missed guidance for every single division and announced a massive $900-million write-down on the value of its unsold Surface tablets, which the market doesn’t seem to fancy. At one point, the announcement caused shares to drop 12%. Combined with Google Inc (NASDAQ:GOOG), which also missed on earnings, both companies lost more than $30 billion in market cap after announcing their quarterly results. At this point, it’s natural to wonder if the market overreacted or not. Microsoft still dominates the PC Operating System business, which is shrinking globally. With 58% of its total sales and 72% of its operating income coming from the PC Industry, Microsoft is surely exposed to this fact. As shipments continue falling (according to Gartner, worldwide PC shipments dropped to 76 million units in the second quarter of 2013, a 10.9% decrease) and the company shows no convincing signal that it can find another cash cow (looking at the latest figures, we can be sure the Azure business is certainly not going to replace the PC business!) in the medium run, it’s natural for investors to worry.

Even worse, Microsoft is bleeding a lot of cash out of its Online Services Division (in charge of its Bing search engine). Since 2005, the company has reported losses of almost $12 billion from its online operations!

The disappointing results give us the idea that Microsoft did try to diversify its business by focusing on Azure tables and online advertisement with Bing. But it’s not working.

Why I believe there is hope

Although there are many reasons to be a bear, I prefer to take a neutral position here. Microsoft is still far away from reaching Apple Inc. (NASDAQ:AAPL) in the tablet market, and even farther away from reaching Google Inc (NASDAQ:GOOG) in the online services market. Yet, the giant is well aware of its market share problems and is committed to find its way to success, even if that implies burning a lot of cash in the short run. Also, unlike Google, Microsoft doesn’t have to deal with high market expectations. I will explain more about this in the next section.

In the tablets market, Microsoft has formidable competitors. Yet, Microsoft has a unique competitive advantage: most PC users are already accustomed to Windows, and they probably will be willing to stay using a similar OS when they shift to tablets.

As for smartphones, the current alliance between Microsoft and Nokia to promote the Windows Phone OS will help to increase market share in the coming quarters, assuming Lumia sales perform better than expected. Gartner again predicts that by 2017 although 1.5 billion devices will run Google’s Android, the amount of devices running Windows and the amount of Apple Inc. (NASDAQ:AAPL) devices will be, roughly speaking, the same: 570 million and 504 million, respectively. To me, this is an upside, because it’s a great progress considering Microsoft was late in the smartphone revolution.

Finally, there’s Windows 8. So far Microsoft has sold fewer copies than what analysts expected, but that can be easily explained. At the moment, the PC business is shrinking. Some have seen this as the last chapter in the PC history, but for me, this is only a transition. The new PC is touch-screen, has an OS that allows for easy integration with smartphone and tablet devices and relies heavily on cloud software. This market is still relatively new, but the fact that Google (I’m referring mainly to the Google Chromebook business, still at an early stage) is also addressing it early confirms my views that the PC world won’t die. It will change. This is a clear upside for Microsoft, it’s Surface Pro hybrid and Windows 8, whose integrated launch should emphasize more the advantages of using it with Office 365 and Skydrive.