Why Warren Buffett is Wrong About The Washington Post Company (WPO)

As much as I admire everyone’s favorite investor, Warren Buffett, I will never understand his love for newspapers, such as The Washington Post Company (NYSE:WPO). The Oracle of Omaha has declared that newspapers face three primary challenges:

–They are no longer the first stop for finding information.

–They are more expensive to produce.

–They have given away their content for free online for far too long. 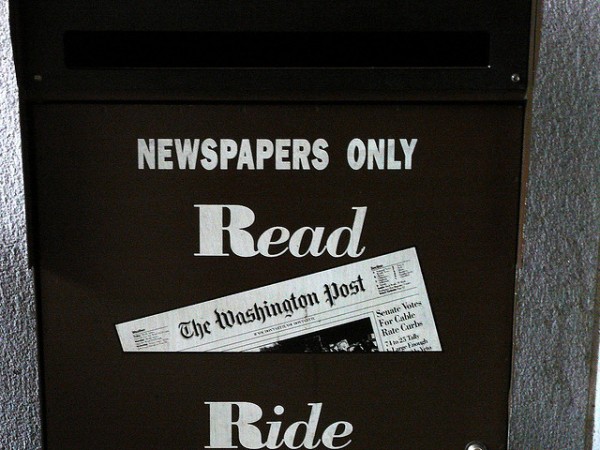 Buffett believes that erecting Internet paywalls and forcing readers to subscribe for premium content will solve the second and third problems, which will alleviate the first problem over time. However, to those three points I offer three counter arguments.

–There will always be free news sources on the Internet, such as Internet portals or social networks such as Twitter, Inc., that are more convenient to access than online editions of print newspapers.

–Even if newspapers cease production of their print editions, their online footprints are still tiny in comparison to giants like Google Inc (NASDAQ:GOOG), Facebook Inc (NASDAQ:FB) and even Yahoo! Inc. (NASDAQ:YHOO).

–Free online content, driven by content farms and ad revenue, has now become the norm in online journalism. In this kind of environment, archaic and stodgy paywalls will never work.

Therefore, that brings me to the recent headline that The Washington Post Company (NYSE:WPO) will erect a paywall to generate revenue, starting this summer.

By comparison, The New York Times Company (NYSE:NYT) erected a digital paywall in March 2011, offering monthly subscription rates between $15 to $35. It was moderately successful, and the company reported a 13% increase in paid digital subscriptions to 668,000 members during the fourth quarter. Meanwhile, print subscribers were given free access to the online version.

The Washington Post Company (NYSE:WPO) intends to charge readers who access over 20 articles per month. Although a final rate has not been set, print subscribers will also be exempt from the fees, as will government employees – such as teachers, government employees and military personnel.

Yet government employees make up a sizable chunk of the Post’s audience, since it covers certain issues – such as federal compensation, and government openings and closings – in deeper detail than its print and Internet rivals. The fact that the Post isn’t willing to charge its core audience should tell you that the company isn’t all that confident with its own plan.

Morningstar analyst Liang Feng believes that charging for online content will help the company in the long term. “Over the long run,” he stated, “you have to believe you have a captive audience for both products, print and digital. You should not be giving one away for free. It’s good to be consistent.”

What I fear is that Buffett and The Washington Post simply don’t understand the changing nature of Internet journalism.

Two words: content farms. Content farms are sprawling websites that aim to churn out as much content – often recycled and rewritten from publicly available sources – as possible. These farms often employ hundreds to thousands of freelancers and bloggers to add articles as quickly as possible to flood the Internet with relatively short articles. These posts are then sold and distributed to syndication partners, which generate revenue through display advertising.

Entire companies have risen on this business model, such as Demand Media Inc (NYSE:DMD), which pays a writer an average of $15 to $30 to write per post, which is then cycled through the aforementioned syndication cycle with its partners. This has caused a huge rift between traditional journalists who spend days and weeks on projects, and rapid-fire bloggers who simply attempt to produce as many stories as possible in a single day. A simple look at Demand’s revenue growth since its public debut in 2011 reveals the paradigm shift.

Time Warner Inc (TWX): Spinning Off the Old and Keeping the New – The...