Why Does Jana Partners Want to Break Up This Company?

Barry Rosenstein further pushed for a breakup of Agrium Inc. (NYSE:AGU) in his presentation on day one of the Value Investing Congress. Rosenstein founded Jana Partners, the value-focused, event driven investment firm, in 2001.

Jana first took a stake in Agrium during the second quarter, equaling 6.5 million shares, valued at $575 million. The position is over 23% of Jana’s second quarter 13F portfolio, and 4% of Agrium’s outstanding shares. As Rosenstein spoke at the conference, Agrium shares hit 52-week highs—raising above $107.

Agrium is a producer and marketer of agricultural nutrients and industrial products, as well as a major retail supplier of agriculture products and services in North and South America. Rosenstein and Jana Partners believe that Agrium’s retail and wholesale businesses would provide the best value for shareholders if they were separate. Jana has stated that the combination of retail and wholesale provide no synergies for Agrium.

Additionally, Jana feels that Agrium is failing to properly manage working capital in the retail segment, which has in excess of $700 million in working capital. Agrium tried to ward Jana off with a dividend and Dutch auction tender, but Rosenstein believes there is more value within the company. Rosenstein has stated that he believes, with the necessary steps, the company could generate an additional $50 per share of value, which would be a 50% upside from the current share price. This is driven by a couple factors, with one being that Agrium’s retail business deserves a higher valuation, but is hampered by the low-multiple wholesale segment.

Despite these characteristics, the retail segment trades at a significant discount to industry distributor peers. During his presentation, Rosenstein further criticized Agrium’s conglomerate structure. He noted that prior work from Morgan Stanley bankers had already discredited Agrium’s conglomerate model while working for competitor CF Industries. Jana’s key belief is that the conglomerate structure is actually disadvantageous for Agrium and provides no real synergies for the company, mainly because of the different skills required to run a wholesale business versus a retail business. Currently, Agrium’s wholesale business accounts for around 70% of EBITDA, while the retail segment accounts for 30%.

Mosaic gets around 60% of its revenues from outside of the U.S. and Canada, but it is still a formidable opponent as one of the world’s largest producers and marketers of concentrated phosphate and potash. The rise in average realized prices for phosphates and potash should benefit all companies, but Mosaic is expected to also see long-term EPS growth based on a secular increase in the demand for fertilizers. The company expects 2013 volume of shipments to be up, driving EPS for 2013 to $4.91, versus 2012 of $4.38.

Potash, the world’s largest potash producer, saw 40% of its sales from its North America segment. Potash owns around 20% of global potash capacity. As with its peers, Potash should see strong demand driven by population growth, improving diets and increased crop yields—this drives 2013 EPS to $3.74, from 2012 of $3.28. CF is a manufacturer and distributor of nitrogen and phosphate fertilizer products in North America. Agrium may see less competition from CF as revenue growth for the company slows to 6.5% in 2012—this follows a 54% increase in 2011. The main issue with CF is that the company is already producing near capacity and therefore experiencing bottlenecks in its productions. As well, there will be constraints on volume growth – corn acreage in North America is already at a 75-year high.

Terra is a CF subsidiary, with CF owning 75% of Terra’s outstanding units, and so the companies together are leading nitrogen producers. Terra pays an almost 8% dividend yield. The company took in nearly $280 million in cash from operations during the first half of 2012, while paying out $150 million in dividend. Although all these companies have their own strengths and weaknesses, they all will see their results vary with the weather.

Although we cannot disagree that perhaps Agrium would serve shareholders best if it were broken up, we are not ready to recommend jumping into the stock with the promise of a magical 50% value appreciation. Mainly because Jana has a long road to go—Jana owned over 5% of McGraw-Hill’s shares and had the support of the Ontario’s Teacher Pension Plan when the firm successfully achieved a breakup of McGraw. Jana owns 4% of Agrium but has no other big backers yet, with the next three largest fund owners holding between 800,000-900,000 shares; and all were downsizing their 1Q positions during the second quarter (see all funds owning Agrium here). 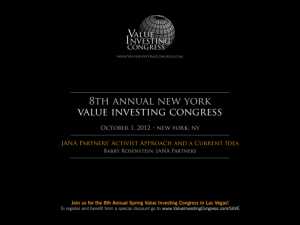 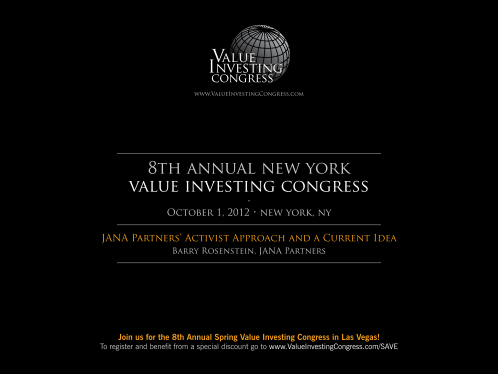 Is AOL a Good Stock to Buy?
Monthly Newsletter Strategy
Download a free copy of our newsletter and see the details inside!
Hedge Fund Resource Center
Billionaire Hedge Funds