Herbalife Ltd. (NYSE:HLF)’s saga is becoming more interesting day by day. The battle lines are drawn and the players have big money/goodwill at stake. On the bullish side are a bunch of hedge fund managers including activists Carl Icahn, Dan Loeb, Robert Chapman; tiger cubs Patrick McCormack, Philippe Laffont; and Stephen Mandel. On the bearish side there is one man army of Bill Ackman. His friend/fellow short seller David Einhorn has publicly distanced himself from the dispute saying “When you look at the range of outcomes, it’s so wide that it’s not clear to me that I want to be long or that I want be short.” His other friend, Whitney Tilson, has actually reported a long position in the call options of the company (It may be just to hedge any short position he has, but it does show Tilson’s lack of conviction). Nevertheless, Ackman’s $1 billion short position (out of which he hasn’t covered anything yet) shows his high level of conviction in the bet.

For every stock, there are always two sides of investment argument. For Herbalife, I am sure readers will be familiar with both bullish and bearish side of the story. So, I won’t rehash them again here. Instead, I will directly address why Ackman’s key argument is flawed.

In this article, I will be showing why this argument is flawed with the help of an example.

Consider an MLM Company which produces and sells product X through its distributors. The average cost of production of X is $15. The company sells this product at $30 to distributors who in turn sell this product at $35 to Retail clients. For simplicity, let us assume 100% of sales are outside the network and there is zero self-consumption among distributors. Also, for this example let’s assume recruiting rewards are limited only to the one level directly hired by the participant. (You may of course assume multiple levels of recruiting or upline rewards, but that would unnecessarily complicate things. Hence, I am avoiding it to keep things simple in this illustration).

Here are the incentives for distributors:

2). $10 reward for hiring a new distributors

3). At least 1 sale to be classified as distributor

4). No commission on sales made by down line distributors (for simplicity) 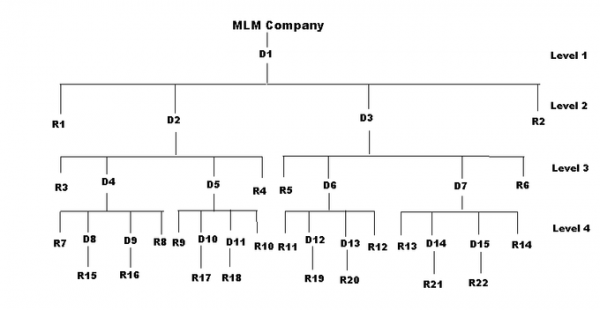 Let’s see how much do the participants in above scheme earn from retail sales and recruiting rewards if the scheme goes up to four levels.

What You Need to Know Going Into Herbalife Ltd. (HLF)’s EarningsPremium Subscribers: Insider Monkey’s Latest Newsletter is Out!
Monthly Newsletter Strategy
Download a free copy of our newsletter and see the details inside!
Hedge Fund Resource Center
Billionaire Hedge Funds