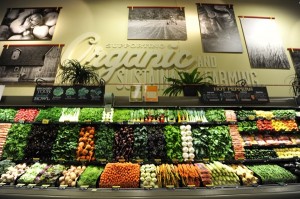 On May 7, Whole Foods Market, Inc. (NASDAQ:WFM) reported solid second quarter numbers. Same-store sales increased 6.9%, and sales jumped 9.4%. The demand for fresh and healthy foods continues to grow, and the company continues to expand its efforts to lower prices and add more locations to capture more customers beyond its upscale shoppers.

Whole Foods Market, Inc. (NASDAQ:WFM) will conduct a two-for-one stock split at the end of May. Shareholders of record on May 17 will get a stock dividend on May 29 and receive one new share for every share they own, where the stock will trade at the post-split price on May 30.

The net income for Whole Foods Market, Inc. (NASDAQ:WFM) increased 20% to $142 million (76 cents per share), beating analysts’ estimate of 73 cents per share despite lowering prices to compete with mainstream grocers, such as The Kroger Co. (NYSE:KR) and Safeway Inc. (NYSE:SWY). Kroger, with a market cap of $18.22 billion, is a retailer in the United States that operates retail food and drug stores, multi-department stores, jewelry stores, and convenience stores. With its competitive position, Kroger is once again expanding its store base and operating margin after a long-term decline. The Kroger Co. (NYSE:KR)’s share price has been on a run since July.

Safeway, with a market cap of $5.82 billion, operates a retail food and drug chain in the U.S. and Canada. With increasing competition from lower-cost operators, Safeway rolled out the “just for u” initiative to improve its loyalty program. Safeway Inc. (NYSE:SWY)’s share price had also been on a run since August, 2012. However, with a disappointing first quarter report, the price pulled back nearly 14% on April 25.

As for the share price performance, Whole Foods Market, Inc. (NASDAQ:WFM) has been very bullish since early April. Analysts currently have a mean target price of $102.32. Whole Foods is also currently trading above its key 50 and 200-day moving average levels.

With continued strong same-store sales and increasing store expansion in 2014, Whole Foods remains a promising bet in the organic and all-natural food industry, supported by a solid cash position. More upside is expected for Whole Foods in the coming years.

The article Whole Foods Disputes Growth Concerns with Solid Numbers originally appeared on Fool.com and is written by Nick Chiu.