Mirror, mirror, on the wall, who’s the frailest big pharma of all? The patent cliff has certainly taken its toll over the past couple of years, weakening several successful pharmaceutical companies. Which are faring the worst during this tumultuous period? Let’s look at some of the frailest companies out there.

Sickly sales
Plenty of large drug companies lost exclusivity for some drugs during recent years. However, for a few, expiration of patents wreaked havoc on the top line. 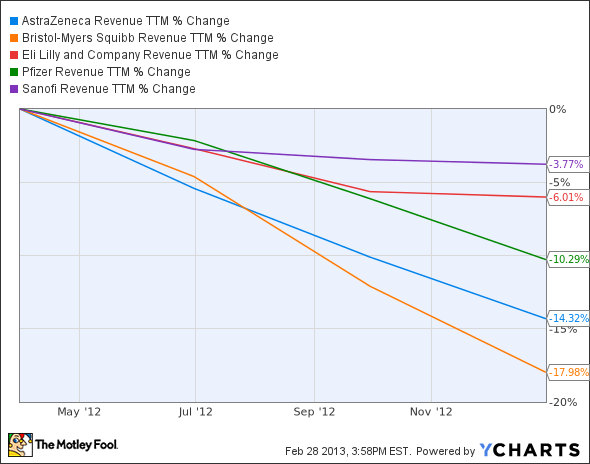 Bristol Myers Squibb Co. (NYSE:BMY) really went through a world of hurt. Revenue dropped nearly 18% since the beginning of 2012 after the patent for Plavix expired. From 2011 to 2012, sales of Plavix plummeted by $4.5 billion. Ouch.

AstraZeneca plc (ADR) (NYSE:AZN) wasn’t too far behind, with revenue falling 14%. Saying goodbye to exclusivity for Seroquel IR caused much of the damage. Sales for the drug in 2012 totaled $1.3 billion, a 70% drop from the $4.3 billion earned the prior year.

Lipitor remained the primary driver behind Pfizer Inc. (NYSE:PFE)‘s declining overall sales. The drug still pulled in nearly $4 billion in 2012. However, that level is still far short of the $9.6 billion from 2011.

Eli Lilly & Co. (NYSE:LLY) felt the pain of losing exclusivity for Zyprexa in 2011, but rising sales of other drugs, particularly Cymbalta, helped cushion the blow. Likewise, generic competition for Lovenox, Aprovel, and Plavix dented revenue for Sanofi SA (ADR) (NYSE:SNY), but the impact was offset in large part by sales growth for other products.

Fragile futures
The biggest problem with the patent cliff is that it isn’t over. More drugs will go off patent in the next few years. That, of course, means that the future for some big pharmas might look worse than the past. Lilly looks to have a rough stretch over the next three years as several blockbuster drugs go off patent. The company’s current top-seller, Cymbalta, loses exclusivity at the end of this year. Humalog also loses patent protection this year, while Evista goes off-patent in 2014.

All isn’t gloom and doom, though. Bristol should see growing sales from Onglyza, Byetta, and Bydureon — all three part of a partnership with AstraZeneca. The company should also get a boost from Sprycel, Yervoy, and Orencia. Lilly’s positives primarily stem from its animal health unit, Effient, and Forteo.

Pfizer benefits from a wide array of drugs with double-digit annual sales growth. The company also still owns around 80% of animal-health spinoff Zoetis Inc (NYSE:ZTS), which helps cushion some of the pain associated with the patent cliff.