Rivals or similar companies tend to report earnings around the same time, making for interesting comparative opportunities.  Two of my favorite companies report earnings a day apart, and they just so happen to operate in the same industry.  I’m talking about The Home Depot, Inc. (NYSE:HD) and Lowe’s Companies, Inc.  (NYSE:LOW), the two largest home-improvement retailers.  Before these companies announce how they did in fiscal year 2013 (their fiscal years both end on January 31st), I’d like to take a look to see which looks like the more attractive investment right now.

First, here is a little bit about both companies.  Home Depot is the largest home improvement retailer in the world with 2,252 stores and Lowe’s is second, with 1,712 stores of its own.

While Lowe’s has recently expanded into Canada and Mexico, Home Depot has done the same on an even grander scale.  Home Depot has opened 12 locations in China, but doesn’t appear to be interested in expanding there at this time, having already closed five of the locations.

I would like to evaluate these companies in three areas, and then we’ll attempt to determine which one should be bought right now.

Past and Future Growth

As far as past growth goes, both companies have done an impressive job of growing over the past decade. 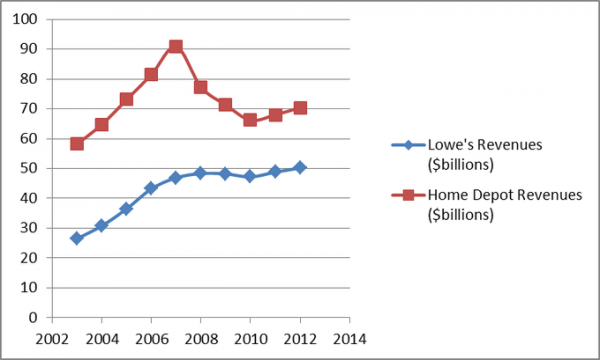 So, I have a couple of observations here.  Not only did Lowe’s grow more overall during this time period (89% vs. 21%), but it appears Lowe’s was more resistant to the 2008-2010 recession than Home Depot was.

Now let’s see who has done the better job of creating value for its shareholders, and the two best ways to measure this are by looking at dividends and buybacks.  Lowe’s pays out a 1.66% dividend yield and has increased this in 9 out of the past 10 years.  Home Depot yields a slightly higher 1.72%, which it has raised in 8 of the past 10 years.  So far, they are pretty even. 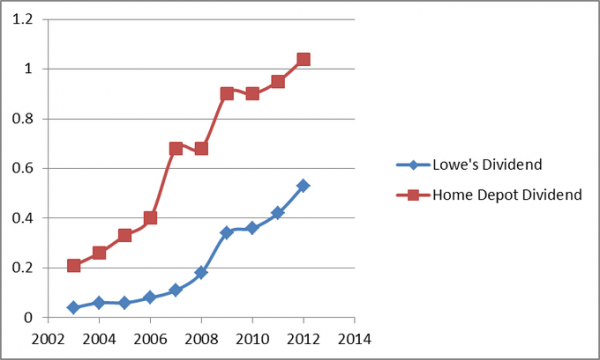 As far as the repurchase of shares goes, over the past five years, Lowe’s has reduced the number of outstanding shares by 23.6%, as opposed to just 10.6% for Home Depot.  So, this category too goes to Lowe’s

Dow at Five Year Highs: What to Buy and Sell: Vale SA (ADR) (VALE) and More