Billionaire hedge fund manager David Tepper posted outstanding 2012 performance; he brought in $2.2 billion and returned some 30% for his hedge fund Appaloosa Management. In light of his success, it’s time to dig a bit deeper into how other top hedge fund managers made their fortunes in 2012.

Billionaire Carl Icahn came in second behind Tepper in 2012, earning some $1.9 billion, and seeing his hedge fund return 28%.
Icahn is an activist investor whotakes stakes in companies to push for better organization and management change. A couple of Ichan’s big winners in 2012 include CVR Energy, Inc. (NYSE:CVI) and The Hain Celestial Group, Inc. (NASDAQ:HAIN). At the end of 2012, CVR Energy, Inc. (NYSE:CVI) was still Icahn’s second-largest public equity holding, and Hain Celestial was seventh (see all of Icahn’s picks). 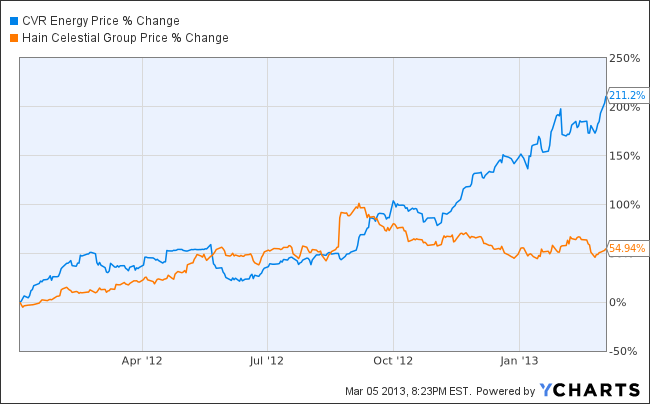 CVR is an independent refiner and marketer of transport fuels, and a producer of nitrate fertilizers.
Icahn owns over 80% of CVR Energy, Inc. (NYSE:CVI) and previously planned to take the company private, but the deal fell about in August of last year. Since then, the stock has more than doubled.

Big CVR Energy, Inc. (NYSE:CVI) news of late includes the company’s plans to begin paying a quarterly dividend of $0.75 per share as of Q2 2013. That payout’s well backed by its $725 million in cash on hand. A $0.75 quarterly dividend at the current share price represents a 4.8% dividend yield. CVR Energy also recently spun off its refining master limited partnership, but still owns 84% of the MLP, CVR Energy, Inc. (NYSE:CVI) Refining LP.

Icahn first took interest in Hain Celestial back in the first quarter of 2010, and has been buying up shares of the company steadily since then. He now owns more than 15% of the outstanding shares.

At the time Icahn started buying back in 2012, he had this to say about the foods company:“Hain has a strong portfolio of brands that position it well for a continuing secular shift towards organic and all natural foods and consumer packaged goods. We look forward to working with the current board and management toward enhancing stockholder value.” I believe this continues to be the case as the market for organic foods gains traction.

Hain is one of the leaders in natural food industry, with an array of well-known brands. Key acquisitions for the company have allowed it to continue building market share, but a slowing economic environment has limited the growth of Hain’s higher-priced product line. However, as of late, the company is seeing growth and margin expansion, with its recent quarterly results showing earnings of $0.72 per share, up 35% from the prior-year quarter, and sales up 25%.

And earning the bronze medal…

Tying for third were Steve Cohen of SAC Capital and Jim Simons of Renaissance Technologies, both earning $1.3 billion in 2012.

Cohen’s SAC Capital returned 13% net returns in 2012, thanks in part to big picks such as Sirius XM Radio Inc. (NASDAQ: SIRI) Cohen first made a big bet on Sirius during the first quarter of 2012, putting the stock into into the top five of the hedge fund’s holdings. It remained there until the end of 2012, when SAC had Sirius as seventh (check out Cohen’s cheap stock picks).

Sirius XM Radio Inc (NASDAQ:SIRI) is a great play on a rebounding auto industry (read more here). The satellite radio company was up almost 60% for 2012, but could still move higher in 2013. The subscription-based satellite radio provider has its radio as the standard product in 70% of the cars produced in the U.S. Recent quarterly results for Q4 came in at $0.02, well above the $0.01 from the same quarter last year.

The company has also offered robust guidance across the board for 2013, with revenue expected to be up 9% year over year, EBITDA up 20%, and free cash flow up 27%. What’s more, the valuation and growth for Sirius is quite compelling. The stock trades at six times earnings, while its five-year expected earnings growth is 29%, leading it to a 0.2 PEG.