Werner Enterprises, Inc. (NASDAQ:WERN) investors should pay attention to a decrease in hedge fund interest in recent months. Our calculations also showed that WERN isn’t among the 30 most popular stocks among hedge funds (see the video below).

What have hedge funds been doing with Werner Enterprises, Inc. (NASDAQ:WERN)? 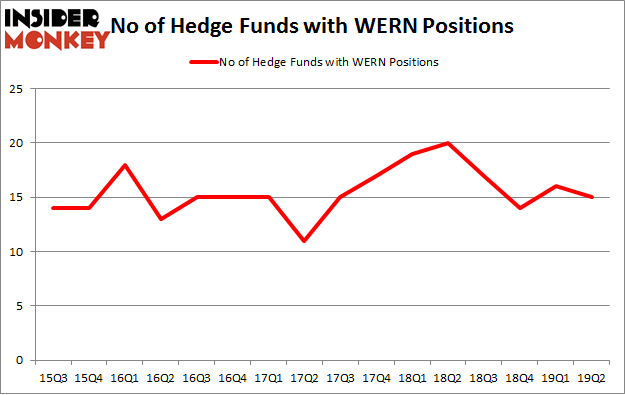 The largest stake in Werner Enterprises, Inc. (NASDAQ:WERN) was held by AQR Capital Management, which reported holding $32.5 million worth of stock at the end of March. It was followed by Citadel Investment Group with a $26.8 million position. Other investors bullish on the company included Royce & Associates, Two Sigma Advisors, and Millennium Management.

Seeing as Werner Enterprises, Inc. (NASDAQ:WERN) has experienced bearish sentiment from the entirety of the hedge funds we track, it’s easy to see that there lies a certain “tier” of funds who were dropping their entire stakes heading into Q3. Intriguingly, Alexander Mitchell’s Scopus Asset Management dumped the biggest investment of the “upper crust” of funds followed by Insider Monkey, totaling close to $3.4 million in stock. Paul Tudor Jones’s fund, Tudor Investment Corp, also sold off its stock, about $1.5 million worth. These bearish behaviors are interesting, as aggregate hedge fund interest was cut by 1 funds heading into Q3.

As you can see these stocks had an average of 16 hedge funds with bullish positions and the average amount invested in these stocks was $222 million. That figure was $111 million in WERN’s case. Commercial Metals Company (NYSE:CMC) is the most popular stock in this table. On the other hand Trustmark Corporation (NASDAQ:TRMK) is the least popular one with only 14 bullish hedge fund positions. Werner Enterprises, Inc. (NASDAQ:WERN) is not the least popular stock in this group but hedge fund interest is still below average. Our calculations showed that top 20 most popular stocks among hedge funds returned 24.4% in 2019 through September 30th and outperformed the S&P 500 ETF (SPY) by 4 percentage points. A small number of hedge funds were also right about betting on WERN as the stock returned 13.6% during the same time frame and outperformed the market by an even larger margin.