“Market volatility has picked up again over the past few weeks. Headlines highlight risks regarding interest rates, the Fed, China, house prices, auto sales, trade wars, and more. Uncertainty abounds. But doesn’t it always? I have no view on whether the recent volatility will continue for a while, or whether the market will be back at all-time highs before we know it. I remain focused on preserving and growing our capital, and continue to believe that the best way to do so is via a value-driven, concentrated, patient approach. I shun consensus holdings, rich valuations, and market fads, in favor of solid, yet frequently off-the-beaten-path, businesses run by excellent, aligned management teams, purchased at deep discounts to intrinsic value,” are the words of Maran Capital’s Dan Roller. His stock picks have been beating the S&P 500 Index handily. We pay attention to what hedge funds are doing in a particular stock before considering a potential investment because it works for us. So let’s take a glance at the smart money sentiment towards Altair Engineering Inc. (NASDAQ:ALTR) and see how it was affected.

Altair Engineering Inc. (NASDAQ:ALTR) has seen an increase in hedge fund interest lately. ALTR was in 14 hedge funds’ portfolios at the end of the fourth quarter of 2018. There were 13 hedge funds in our database with ALTR holdings at the end of the previous quarter. Our calculations also showed that altr isn’t among the 30 most popular stocks among hedge funds.

In today’s marketplace there are tons of formulas stock traders employ to grade publicly traded companies. A couple of the less known formulas are hedge fund and insider trading activity. We have shown that, historically, those who follow the best picks of the elite fund managers can trounce the S&P 500 by a solid amount (see the details here).

What have hedge funds been doing with Altair Engineering Inc. (NASDAQ:ALTR)?

Heading into the first quarter of 2019, a total of 14 of the hedge funds tracked by Insider Monkey held long positions in this stock, a change of 8% from one quarter earlier. The graph below displays the number of hedge funds with bullish position in ALTR over the last 14 quarters. So, let’s examine which hedge funds were among the top holders of the stock and which hedge funds were making big moves. 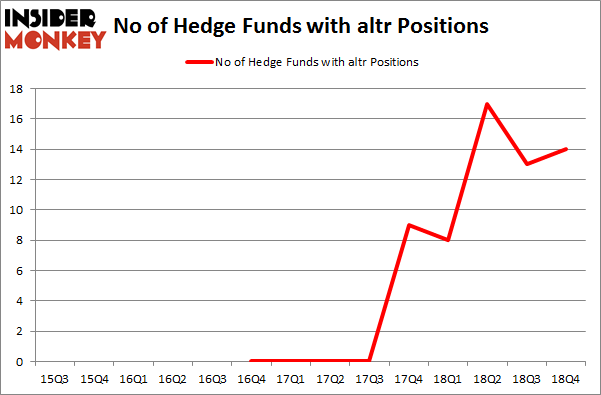 Of the funds tracked by Insider Monkey, Brian Ashford-Russell and Tim Woolley’s Polar Capital has the largest position in Altair Engineering Inc. (NASDAQ:ALTR), worth close to $20.3 million, corresponding to 0.2% of its total 13F portfolio. On Polar Capital’s heels is Driehaus Capital, managed by Richard Driehaus, which holds a $12.9 million position; 0.6% of its 13F portfolio is allocated to the stock. Other members of the smart money that are bullish include John Overdeck and David Siegel’s Two Sigma Advisors, Israel Englander’s Millennium Management and Peter Rathjens, Bruce Clarke and John Campbell’s Arrowstreet Capital.

Consequently, some big names have jumped into Altair Engineering Inc. (NASDAQ:ALTR) headfirst. Polar Capital, managed by Brian Ashford-Russell and Tim Woolley, created the most outsized position in Altair Engineering Inc. (NASDAQ:ALTR). Polar Capital had $20.3 million invested in the company at the end of the quarter. Noam Gottesman’s GLG Partners also initiated a $0.8 million position during the quarter. The only other fund with a brand new ALTR position is Michael Platt and William Reeves’s BlueCrest Capital Mgmt..

As you can see these stocks had an average of 17.25 hedge funds with bullish positions and the average amount invested in these stocks was $232 million. That figure was $62 million in ALTR’s case. SeaWorld Entertainment Inc (NYSE:SEAS) is the most popular stock in this table. On the other hand Acadia Realty Trust (NYSE:AKR) is the least popular one with only 11 bullish hedge fund positions. Altair Engineering Inc. (NASDAQ:ALTR) is not the least popular stock in this group but hedge fund interest is still below average. Our calculations showed that top 15 most popular stocks) among hedge funds returned 24.2% through April 22nd and outperformed the S&P 500 ETF (SPY) by more than 7 percentage points. A small number of hedge funds were also right about betting on ALTR as the stock returned 37.9% and outperformed the market by an even larger margin.