Were Hedge Funds Right About Warming Up To Omeros Corporation (OMER)?

Is Omeros Corporation (NASDAQ:OMER) going to take off soon? The best stock pickers are taking an optimistic view. The number of bullish hedge fund bets moved up by 2 recently. Our calculations also showed that OMER isn’t among the 30 most popular stocks among hedge funds (see the video below). OMER was in 8 hedge funds’ portfolios at the end of June. There were 6 hedge funds in our database with OMER holdings at the end of the previous quarter. 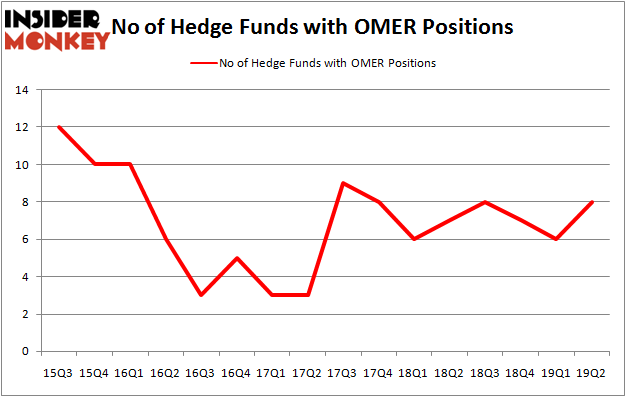 How have hedgies been trading Omeros Corporation (NASDAQ:OMER)?

Heading into the third quarter of 2019, a total of 8 of the hedge funds tracked by Insider Monkey held long positions in this stock, a change of 33% from the previous quarter. The graph below displays the number of hedge funds with bullish position in OMER over the last 16 quarters. So, let’s see which hedge funds were among the top holders of the stock and which hedge funds were making big moves.

The largest stake in Omeros Corporation (NASDAQ:OMER) was held by Consonance Capital Management, which reported holding $47.9 million worth of stock at the end of March. It was followed by D E Shaw with a $35.8 million position. Other investors bullish on the company included Millennium Management, Citadel Investment Group, and OZ Management.

As one would reasonably expect, some big names were breaking ground themselves. Citadel Investment Group, managed by Ken Griffin, initiated the most valuable position in Omeros Corporation (NASDAQ:OMER). Citadel Investment Group had $0.9 million invested in the company at the end of the quarter. Michael Gelband’s ExodusPoint Capital also initiated a $0.2 million position during the quarter.

As you can see these stocks had an average of 9.25 hedge funds with bullish positions and the average amount invested in these stocks was $61 million. That figure was $98 million in OMER’s case. Krystal Biotech, Inc. (NASDAQ:KRYS) is the most popular stock in this table. On the other hand Bitauto Holdings Limited (NYSE:BITA) is the least popular one with only 7 bullish hedge fund positions. Omeros Corporation (NASDAQ:OMER) is not the least popular stock in this group but hedge fund interest is still below average. Our calculations showed that top 20 most popular stocks among hedge funds returned 24.4% in 2019 through September 30th and outperformed the S&P 500 ETF (SPY) by 4 percentage points. A small number of hedge funds were also right about betting on OMER, though not to the same extent, as the stock returned 4.1% during the third quarter and outperformed the market.