Were Hedge Funds Right About Warming Up To Chuy’s Holdings Inc (CHUY)?

Is Chuy’s Holdings Inc (NASDAQ:CHUY) the right investment to pursue these days? Investors who are in the know are buying. The number of bullish hedge fund positions improved by 2 recently. Our calculations also showed that CHUY isn’t among the 30 most popular stocks among hedge funds (see the video below). CHUY was in 12 hedge funds’ portfolios at the end of the second quarter of 2019. There were 10 hedge funds in our database with CHUY holdings at the end of the previous quarter.

Unlike other investors who track every movement of the 25 largest hedge funds, our long-short investment strategy relies on hedge fund buy/sell signals given by the 100 best performing hedge funds. We’re going to view the latest hedge fund action surrounding Chuy’s Holdings Inc (NASDAQ:CHUY).

What have hedge funds been doing with Chuy’s Holdings Inc (NASDAQ:CHUY)?

At Q2’s end, a total of 12 of the hedge funds tracked by Insider Monkey were bullish on this stock, a change of 20% from one quarter earlier. The graph below displays the number of hedge funds with bullish position in CHUY over the last 16 quarters. With the smart money’s positions undergoing their usual ebb and flow, there exists an “upper tier” of noteworthy hedge fund managers who were increasing their stakes substantially (or already accumulated large positions). 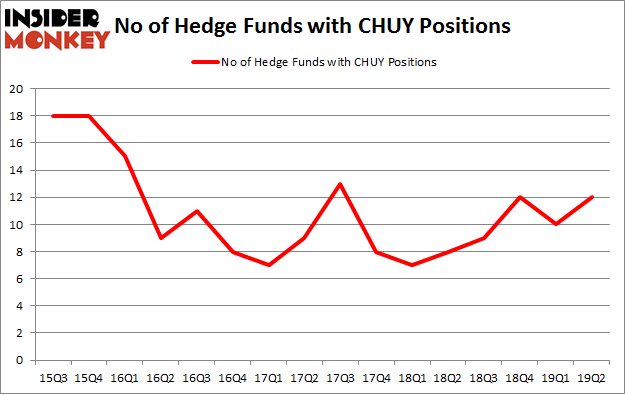 The largest stake in Chuy’s Holdings Inc (NASDAQ:CHUY) was held by Renaissance Technologies, which reported holding $5.3 million worth of stock at the end of March. It was followed by D E Shaw with a $5 million position. Other investors bullish on the company included Marshall Wace LLP, Coatue Management, and Citadel Investment Group.

As aggregate interest increased, key hedge funds were leading the bulls’ herd. Coatue Management, managed by Philippe Laffont, initiated the most outsized position in Chuy’s Holdings Inc (NASDAQ:CHUY). Coatue Management had $2.3 million invested in the company at the end of the quarter. Ken Griffin’s Citadel Investment Group also made a $1 million investment in the stock during the quarter. The following funds were also among the new CHUY investors: Minhua Zhang’s Weld Capital Management, Benjamin A. Smith’s Laurion Capital Management, and Peter Algert and Kevin Coldiron’s Algert Coldiron Investors.

As you can see these stocks had an average of 9.5 hedge funds with bullish positions and the average amount invested in these stocks was $51 million. That figure was $19 million in CHUY’s case. Acorda Therapeutics Inc (NASDAQ:ACOR) is the most popular stock in this table. On the other hand Calyxt, Inc. (NASDAQ:CLXT) is the least popular one with only 3 bullish hedge fund positions. Chuy’s Holdings Inc (NASDAQ:CHUY) is not the most popular stock in this group but hedge fund interest is still above average. Our calculations showed that top 20 most popular stocks among hedge funds returned 24.4% in 2019 through September 30th and outperformed the S&P 500 ETF (SPY) by 4 percentage points. Hedge funds were also right about betting on CHUY as the stock returned 8% during the third quarter and outperformed the market. Hedge funds were rewarded for their relative bullishness.